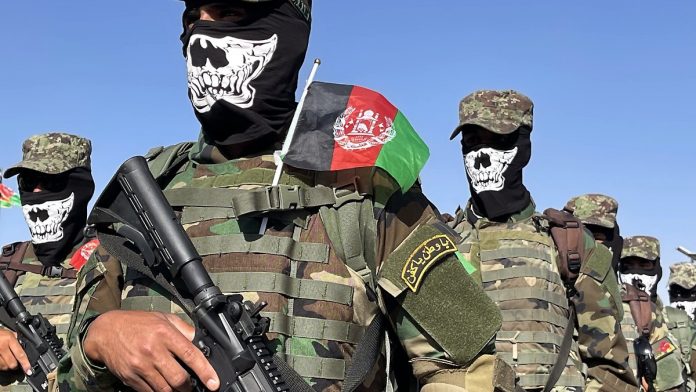 Shooting in an ambush

Since NATO’s withdrawal from Afghanistan, government forces have been in great danger. But Kabul insists on reclaiming the lost lands. 20 elite soldiers in a Taliban ambush. The survivors were executed.

More than 20 Afghan government special forces were killed while trying to retake an area in the north of the country from the hardline Islamist Taliban movement. This was confirmed by local officials. The incident, which occurred in Dawlatabad district of Faryab province, caused panic and panic in Afghanistan. According to officials, the Elite Forces briefly managed to retake the center of the region on Tuesday afternoon. However, they were ambushed shortly thereafter by the Taliban, who were hiding in nearby villages.

Security sources said that those who survived the ambush gathered in one place and then opened fire. And spread on social networking sites several videos of soldiers lying in one place.

Since the start of the withdrawal of international forces on May 1, the security situation in Afghanistan has deteriorated significantly. Since then, the Taliban have managed to occupy at least 27 districts out of about 400 districts in the country. Across the country, well-trained and well-equipped special forces are deployed in support of the threatened areas. Critics say these are tasks that are impossible to accomplish for the elite forces.

Geographical distribution is not clear

Hundreds of security guards have been killed since the beginning of May. In some areas, after mediation by the elderly, the Taliban allowed the security forces to withdraw without attacking them. The government now wants to criminalize such mediation. The withdrawal of US and other NATO forces must be completed by 9/11 at the latest. Peace talks are faltering.

There have been no official figures since 2018 on who controls the regions in the country. Observers consider the Taliban’s recent territorial gains unprecedented – according to UN figures, they occupied only five districts in the previous year, four of which the government managed to retake in a few days. However, the Taliban will also have to occupy the provincial capitals so that they can make significant military advances and turn the situation in their favour.