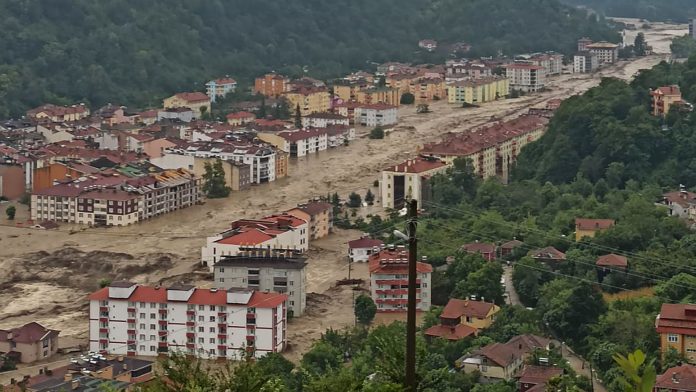 While southwestern Turkey is affected by forest fires, torrential rains in the north cause floods and landslides. At least 17 people were killed, according to authorities.

Floods and landslides after heavy rain have so far killed at least 17 people in northern Turkey. Crowds of water destroyed homes and bridges in the Black Sea provinces of Bartin, Kastamonu, Sinop and Samsun on Wednesday, destroying cars in them. Helicopters rescued people who went to safety on the rooftops.

The most affected area was apparently Kastamonu, where large parts of the city of Bozkurt were flooded. At least 13 people were injured when part of a bridge collapsed in Barten County. Helicopters of the armed forces transported 80 people to safety in the area. Electricity was cut off in many areas and the streets of the village were closed.

The hospital has been evacuated

The hospital in Sinop had to be evacuated. Authorities said 45 patients, including four patients in intensive care, were taken to safety during the operation. Health Minister Fahrettin Koca said the operation was necessary due to severe water leakage. Pictures from the Dubai Health Authority showed that the hospital floor was submerged in water.

I am Firefighters are trying hard in southwestern Turkey Meanwhile, to put out a forest fire in Mugla Province, a region on the Aegean Sea popular with tourists.

See also  Rich Germans fortify their billions in these countries

Shark fin caught by the box: in Asia it is considered a delicacy – news abroad

6. Straight win: RWE consolidates top spot in the table ahead of the derby...

Regional football team Rot-Weiss Essen won 2-1 at SV Lippstadt and cemented the top spot in the standings table. The next day of...

Apple Watch can unlock iPhone when Face ID is not working due to the mask. Unfortunately, this doesn't work for the iPhone 13 -...

Shark fin caught by the box: in Asia it is considered a delicacy –...

Sharks are the rulers of the seas. But they have no...

Volcanic eruption in Saint Vincent: Thousands of people were taken to...