Home Economy Battery production in Grünheide: Tesla can count on billions of financing 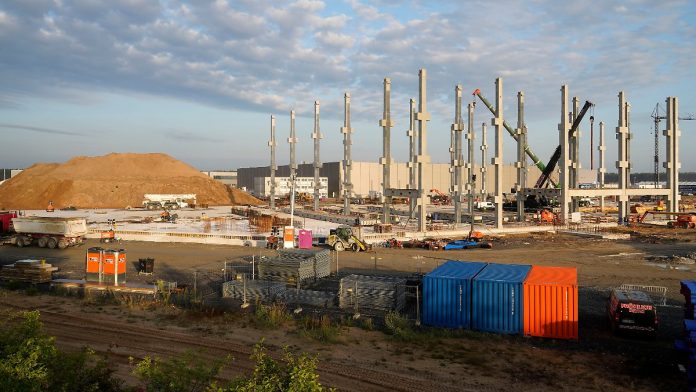 Tesla can count on billions in funding

In Grünheide near Berlin, Tesla wants to manufacture not only electric cars, but also battery cells of the future. For this, the American automaker can expect funds from the European Union in excess of one billion euros. According to one report, the funding is about to be approved.

According to a media report, US electric car maker Tesla can expect government funding of about 1.1 billion euros from the European battery cell programme. Tagesspiegel reported that funding from the Federal Ministry of Economy has come for approval. When asked, the federal ministry stated that there was no “final figure” for Tesla’s funding as part of the battery project. The Ministry of Economy in Brandenburg has not commented on the report.

Not only does Tesla want to build Europe’s first electric car plant in Grünheide near Berlin, it also wants to mass-produce battery cells there. The Federal Ministry of Economics stated that the process of determining the exact amount of funding has not yet been completed. “Please understand that we cannot provide any information on the amount of federal funding or state participation before the grant notice is issued. The notice is currently being extensively prepared and scheduled for the fourth quarter of 2021.”

At the beginning of the year, the European Union Commission approved billions of dollars in aid for the second time to support battery production in Europe. Germany and eleven other countries in the European Union could save up to 2.9 billion euros as well as advance electric mobility. Tesla in Brandenburg could also benefit from the financing. Germany is in the process of coordinating its second battery programme.

In Grünheide, production of electric cars was originally supposed to start at the beginning of July, but Tesla is now targeting the end of the year. The company is currently building through early permits because the final decision on the environmental permit issued by the state of Brandenburg is still pending. When the decision comes it is still open. Up to 500,000 vehicles are expected to roll off the assembly line at Grünheide in Brandenburg each year.

Tesla president Elon Musk has already visited Grünheide several times, given job interviews and stayed there. Recently, he met the candidate of the Union Chancellor Armin Laschet at the construction site. Both complained about the slow grinding wheels of the German bureaucracy.

Strong appeal from Hans and Rehlinger for new developments