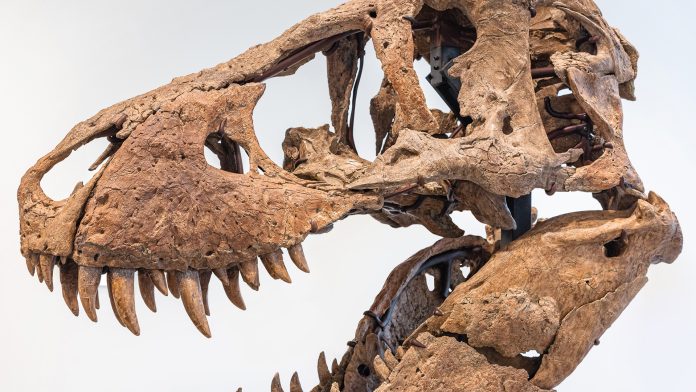 Maximus T-Rex skull fetch $6 million at auction It’s not the first dino to go under the hammer: in 2022, two more skeletons will be auctioned for millions. Experts take a critical view of this.

A Tyrannosaurus Rex skull fetched $6.1 million at auction in New York. Sotheby’s said the contract was awarded to an anonymous bidder. Experts at the auction house predicted up to 20 million US dollars.

According to the auction house, the skull is about 67 million years old and was discovered on private property in the US state of South Dakota. It is one of the most complete sets of cranial bones ever discovered. The skull, dubbed “Maximus”, is two meters long and weighs about 90 kilograms.

Many experts criticize skeletons of scientific value being auctioned off. “It’s something I’d like to investigate in my research if I could,” paleontologist James J. Napoli told The New York Times.

Napoli studies the difference between dinosaur specimens. “We always hope that an institution or an individual who will donate to someone will buy it,” he said.

“We can’t get around the fact that we live in a capitalist society — that’s how our world works,” Cassandra Hatton of Sotheby’s, who organized the auction, told The New York Times. “It will probably be privately owned for a while, but I think it will eventually end up in museums.”