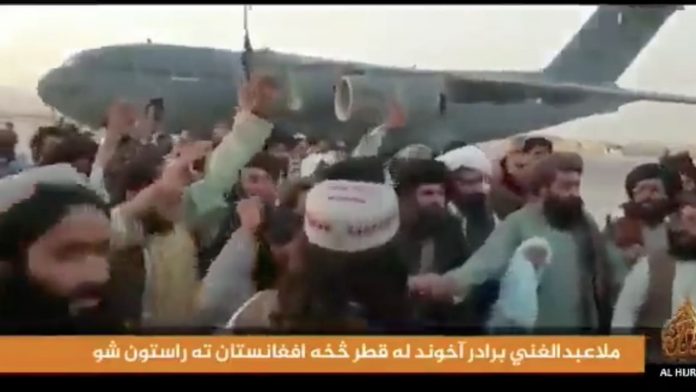 There are incredible scenes that happened in Kandahar, Afghanistan.

A massive US military plane landed at the city’s Taliban-controlled airport early Tuesday evening. It is a Boeing C-17 Globemaster. The type of aircraft the United States has been using for days to evacuate its citizens, foreigners and former local Afghan staff from Kabul.

A photo of 640 evacuees completely exhausted but blissfully euphoric in the belly of a C-17 went viral around the world over the weekend.

But there are no refugees waiting for the transport plane that has landed at Kandahar airport, but there is a welcome committee from the Taliban. The machine door opens – and only Mullah Baradar, who is considered the political leader of the radical Islamists, comes out.

Cheers at Kandahar airport, considered the “birthplace of the Taliban” since the 1990s.

What at first glance seems like the wrong world becomes apparent when you take a closer look at the massive C-17. Because it is not affiliated with the US Air Force, but rather the army of the Emirate of Qatar. The organizer of next year’s World Cup – which is also an “emirate” – is one of the closest allies to the Islamists.

Negotiations with the United States of America have been going on in luxury hotels in Qatar for a year, as representatives of the German government are currently negotiating with the Taliban about the release of hundreds of local workers and their families actually held hostage by the Taliban.

Scandal: While the USA uses Qatar’s Al Udeid Air Base to bring refugees from Kabul to Taliban safety, Qatar uses the base to transport the Taliban to Afghanistan. The Islamist executioners and their victims are not only in sight in Kabul, but also in supposedly safe Qatar – before being flown from there to the United States and other Western countries.

This is how the military expert and spokesman for the Greens’ security policy, Tobias Lindner, sees it.

He told Bild newspaper: “The pictures are frightening when Qatar flies to Afghanistan with the same type of Taliban planes, while the United States is evacuating its citizens to Qatar from there.”

However, at the same time, the photos did not surprise Lindner. “Qatar’s support for the Taliban shows once again how wrong it was to award the World Cup there,” he says.

The FDP’s outside expert, Bijan Giirsaray, goes further. And he demands that the now clear alliance between the Emirate of Qatar and the “Emirate of Afghanistan” of the Taliban not remain without consequences. “If Qatar supports the Taliban or recognizes the rule of terrorism, there must be consequences,” he told Bild newspaper.

“The idea of ​​Taliban supporters hosting the soccer World Cup and presenting themselves as a modern country will not be tolerated,” said his party’s foreign policy spokesman.

Geir Saray: “FIFA should look for alternatives at an early stage,” because the truth is: “Taliban supporters cannot host one of the most important sporting events in the world.”

SPD member of the Bundestag Florian Post (40) demands: “Taliban supporters like Qatar are not allowed to host the soccer World Cup. You have to think of an alternative venue now.”

Czech Republic: a tree crashes into a car – two dead,...