Home World With Turkey and the UN Security Council: Ukraine wants Germany as a... 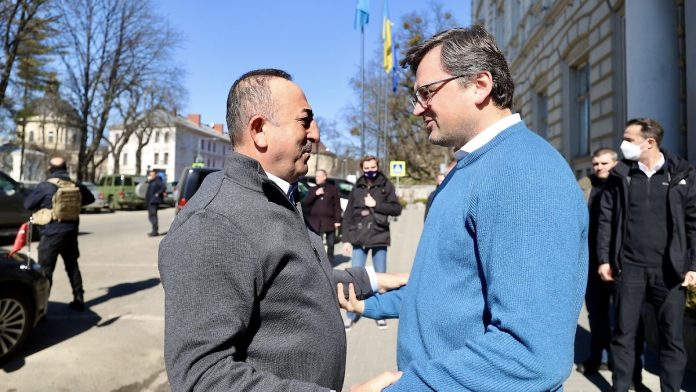 Turkey is trying to mediate between the warring parties. According to the Turkish foreign minister, Ukraine wants Germany to be a guarantor of a possible security agreement with Russia. Cavusoglu sees good opportunities for this. Meanwhile, Moscow accuses Kyiv of a lack of “enthusiasm”.

According to Turkish information, Ukraine wants Germany and Turkey to act as guarantors of a possible security agreement with Russia. At a meeting with his Ukrainian counterpart Dmytro Kuleba in Lviv, Turkish Foreign Minister Mevlut Cavusoglu said that Ukraine had proposed that the five permanent members of the UN Security Council, in addition to Turkey and Germany, act as guarantor of a security agreement between Moscow and Kiev.

Cavusoglu, who met with Russian Foreign Minister Sergei Lavrov on Wednesday, said that during a visit to Moscow the day before, he “saw that the Russian Federation does not see any obstacle in this and can accept such an offer.” “Hopes for a ceasefire have increased,” Cavusoglu said.

Erdogan also suggested sending Turkish monitors to monitor the ceasefire in the coastal city of Mariupol, which has been besieged for weeks, so that people stuck there can leave the city. Foreign Minister Cavusoglu said more than 100 Turks were among those stranded in Mariupol. Turkey proposes a 24-hour ceasefire and the establishment of humanitarian corridors that can be monitored by the Red Cross, the United Nations Office for Humanitarian Affairs (OCHA) and the Turkish Red Crescent.

Meanwhile, Russian Kremlin spokesman Dmitry Peskov said in Moscow that the Russian delegation to negotiations with Ukraine is “doing everything possible” and that it is “ready to work day and night.” He accused the Ukrainian side of not showing “the same enthusiasm”.

Peskov said the day before that the two sides were negotiating a “compromise” that would give Ukraine a neutral status similar to Sweden or Austria. The chief Ukrainian negotiator, Mikhailo Podolak, rejected this and stressed that neutrality would only be possible in return for “absolute security guarantees.”