Home World Why did Meloni suddenly get a tailwind from the EU? 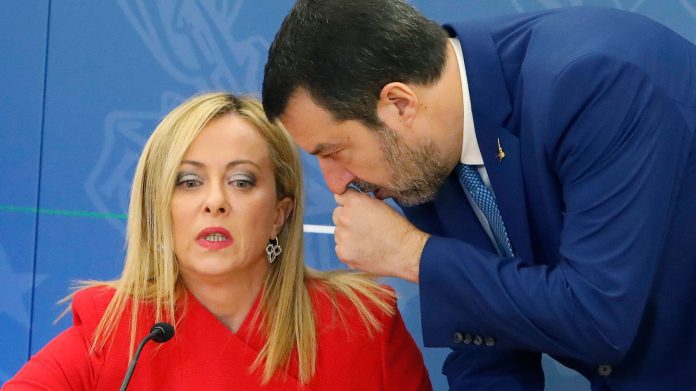 The Italian government is breaking European law, pissing France off – and still celebrating success in the EU. How could this happen.

It’s a big promise that Italy’s new Prime Minister Giorgia Meloni has made to her people: She wants to stop illegal immigration. During the election campaign, she criticized immigration policy in the European Union, and against the policy of previous governments – perhaps this is one reason why her party, the post-fascist Fratelli d’Italia, won early parliamentary elections.

It wasn’t long after she took office at the end of October before she got serious. In a drastic move, her government refused entry to Italian ports for private rescue vessels at the beginning of November – contrary to applicable law. And although it led to a diplomatic row with France, Meloni is now influenced by the European Union. How did you get to this?

The rescue ship has become a European political issue

Time-jump to the second week of November: Private sea rescue ships with several hundred people on board have been lying off the Italian coast for days. Attitudes on the plane reached their peak:

About 30 migrants went on hunger strike in the German “Humanity 1”, and three people from the Norwegian “Geo Barents” jumped into the port of Catania to swim to the shore. While the people on these two ships were finally allowed ashore at the instigation of the health authorities, the third ship, the Norwegian Ocean Viking, developed into a European political issue.

First, the EU Commission intervened and sharply demanded that Italy allocate a port for the ship immediately. “The legal obligation to save lives and ensure their safety at sea is clear and unequivocal, regardless of the circumstances that put people at risk,” the statement read.

Meanwhile, the Italian Coast Guard ships showed how much symbolic politics on the part of Italy were behind them: while off the coast, private marine rescuers brought the rescued people ashore undisturbed. In any case, only the smallest part of the migrants arrive via rescue ships – a significant part of them arrive in Italy on their own boats.

Shortly thereafter, the Italian government declared a success: the ANSA news agency reported that Meloni had arranged a deal with French President Emmanuel Macron on the sidelines of the climate summit: the ship could head for a French port.

Meloni publicly thanked Macron, and the coalition partner, the right-wing Populist League party, sent a jubilant tweet to the world: “The hard line pays off: the French open their doors.” In addition, the party shared a collage with party leader Matteo Salvini laughing in front of the lifeboat. The Minister of Infrastructures was quoted today as saying: “Laria cambiata” loosely translated as: “The wind is changing”.

But if we believe the French government, this promise was never given. Accordingly, she responded angrily: “The Italian position is unacceptable,” said a spokesman on French television. He noted that rescue ships had the right to proceed to the nearest port – and sent another teaser afterwards. “The European rules are very clear and accepted by Italy, which is also the largest recipient of solidarity financial aid from the European Union.” However, the ship called at the French port of Toulon on 11 November.

It is unusual for the French government to choose such blunt words. But she didn’t stop. Not only did French Interior Minister Gerald Darmanin warn the Italian government of “very serious consequences for our bilateral relations.” Like Italy, he used asylum seekers as pawns and blocked an agreement that France should have taken asylum seekers from Italy. Meloni, on the other hand, spoke of treachery and Salvini commented, “In fact, it should be Italy who is protesting.”