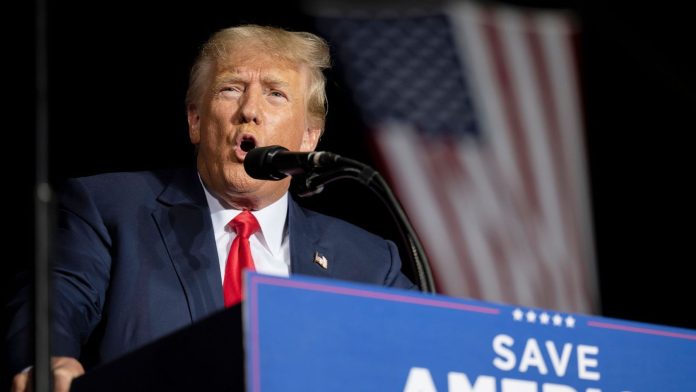 He claims that Jews living in the United States do not value his policy toward Israel enough, former President Donald Trump claims. And he received criticism for his statements – including from the White House.

The White House described former President Donald Trump’s comments as anti-Semitic. He had accused American Jews of not appreciating his Israel policy enough. “Donald Trump’s comments, as you know, were anti-Semitic and insulting to Jews and our Israeli allies,” White House spokeswoman Karen Jean-Pierre said at a news conference Monday. Trump has spoken in unison with extremists and anti-Semitic figures for years. “Anti-Semitism must be uprooted wherever it raises its ugly head,” she said.

On Sunday, Trump claimed on the Truth Social platform, which he co-founded, that no president has done more for Israel than he has. But somewhat surprisingly, “Fantastic Evangelicals value this much more than people of the Jewish faith, especially those who live in the United States.” Jews in the United States should unite and appreciate what they have in Israel – “before it’s too late.”

Trump’s comments on Monday were criticized by the Jewish organization the Anti-Defamation League and others. Its president, Jonathan Greenblatt, noted that Trump’s son-in-law Jared Kushner is Jewish and that his daughter, Ivanka, has converted to Judaism.

It is “amazing” that Trump “continues to invoke old anti-Semitic clichés” despite having Jewish children and grandchildren. He was implying that Jews are not loyal, and he was implying that they are greedy or have great power. This is “a clear pattern of someone welcoming anti-Semitism and extremists into public discourse”.