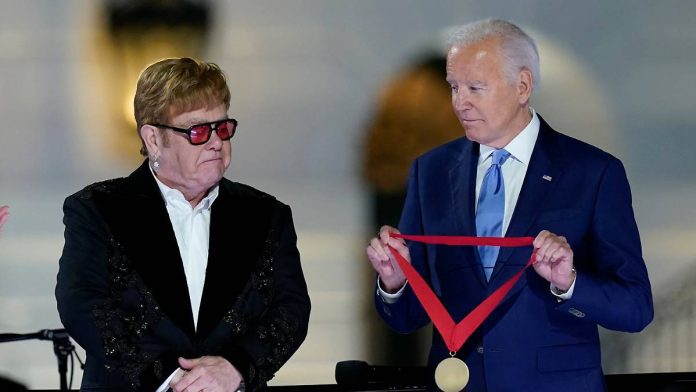 “What a dump here!”
Elton John plays farewell at the White House

Elton John has been on a farewell tour for four years now. The pop icon will retire in a few months. Before that, the 75-year-old played in front of the US president in the White House – and joked about the equipment.

British pop legend Elton John held a concert on the White House lawn. In front of about 2,000 guests of honor, the 75-year-old John sang international songs such as “Your Song”, “I Am Still Standing” and “Rocket Man”. An evening themed “A Night When Hope and History Rhyme”, hosted by US President Joe Biden and First Lady Jill Biden.

John, who has been on a farewell tour since 2018, scheduled to end in July 2023, said it was “the icing on the cake” for him to play here. “What a dump here!” John said in salute before sitting at the piano for his 40-minute performance in a shimmering black suit and orange-tinted glasses on his face. Behind him was the White House luminous, and in front of him stood a fully dressed military squad.

The US government invited activists, especially gay rights advocates, nurses and teachers to the concert. Also in attendance were Afghan Nobel Peace Prize winner Malala Yousafzai and former tennis player and activist Billie Jean King, according to the White House.

US President Biden told John his music “changed our lives”. And at the end of the show, the singer was awarded the National Humanities Medal. “I’ve never been surprised, but now I’m amazed,” said John, who seemed visibly moved when presenting the medal, which the US government honors figures whose work has furthered the understanding of the humanities. John himself expressed his desire that the United States could once again “overcome the political divide.”

John’s Farewell Yellow Brick Road World Tour kicked off in September 2018 in the US state of Pennsylvania and is scheduled to finish in Sweden in July of next year. The 75-year-old was named the top solo artist on Billboard’s 2019 list of the greatest musicians of all time – and third overall after the Beatles and the Rolling Stones.

Tens of thousands in the streets: Poles protest the new broadcast...