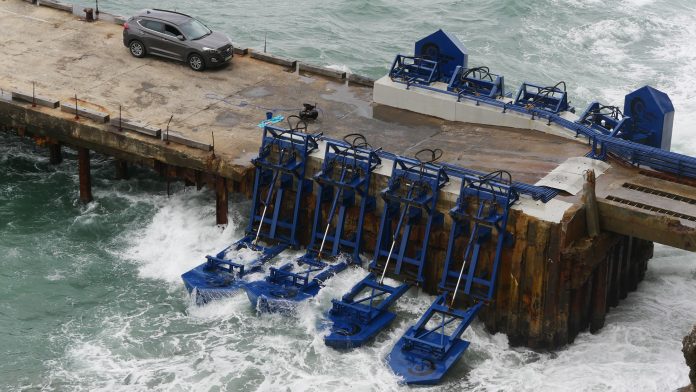 Although Israel has abundant sun, wind, and hydroelectric power, the country uses relatively little renewable energy. The founder of a company wants to change that – with a wave power plant.

The small tourist boat had barely left the sheltered port of Jaffa when the first wave hit it with full force. The bow rises back into the sea. Jane, an Eco-Wave-Power (EWP) employee, exclaims succinctly. The captain of the boat laughs. After a short trip along the harbor wall, the boat reached its destination: Israel’s first power plant. Eight blue buoys, several meters wide and long, sway up and down to the rhythm of the waves, connected by movable rods.

On the other side of the wall, in the sheltered harbor, company founder Ina Braverman inspects the generator. It is the heart of the power plant, housed in a weatherproof shipping container. “This is where the waves become an electric current,” Braverman says. It proudly announces that the power station will be connected to the Israeli electricity grid for the first time in a few days. 100 households can then be provided with clean energy.

She points to the two generators behind her, one of which is already working. “When the waves are low, as today, we only use the small generator, and when the waves are stronger, we use the big one,” explains the entrepreneur. “And if there are really high waves, then both generators are running in parallel.”

As the founder of the Israeli company Eco-Wave-Power, Ina Braverman has for years been campaigning for wave power plants in ports or coastal walls. The technology itself is not new. “So far, systems like this have been installed in the middle of the ocean,” she says. “This makes it complex, expensive, perishable and not environmentally friendly.” The incomparable advantage of its model is the relatively low production costs and environmentally friendly installation on the existing harbor walls. It costs about $450,000 to install a system similar to this one.

Plants also in Spain and Portugal

Braverman has now signed two contracts with European Union countries to build their “Wave Power Plant”, larger than the one in the Jaffa Port. A wave power plant will be built on the Spanish coast with a capacity of 2 megawatts, that is, electricity for about 2,000 homes. Another terminal is under construction on the Portuguese coast and is expected to supply 20,000 families.

The founder wants to develop wave power plants not only in the European Union, but also in Israel. It is still possible to expand the development of clean energy sources at high-tech sites in Israel. Israel has narrowly missed its self-imposed goal of covering at least 10% of its energy needs with renewable energy by 2020. There are hardly any large-scale solar parks in the country where the sun shines almost every day.

The Ministry of Energy is still on request ARD-Studios Tel Aviv undefined. Work is underway on a strategy to implement climate goals for 2030 and 2050. In order to end coal use in the country, they also want to use more natural gas on a transitional basis.

However, Tel Aviv has set clearer goals: By 2030, the city wants to generate 100 percent of the energy for its community buildings and all streetlights from solar and wave energy. Ina Braverman considers this a valid and good signal. She hopes to soon be able to build more wave power plants – in Tel Aviv and other coastal cities in Israel.