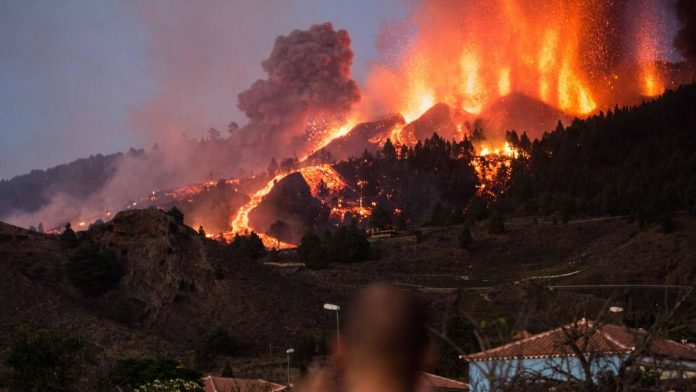 The end of the volcanic eruption is not in sight at present. Cumbre Vieja volcano continues to shoot lava into the sky. Toxic ash rain covers large parts of the Canary Island and lava continues to flow towards the sea. So far, about 350 homes and large areas of the island’s large banana plantations have been destroyed. Roads and power lines have also disappeared under the lava – about 166 hectares of the island is now covered with lava.

However, the volcanic eruption has an impact not only on the island of La Palma and its immediate surroundings, but also on large parts of the Mediterranean. According to the Canary Volcano Research Institute Involcan, Cumbre Vieja has spewed between 6,000 and 11,500 tons of sulfur dioxide per day since Sunday. The cloud of this gas has already reached the coast of Morocco and is expected to hit the mainland of Spain as well.

According to their own statement, they were only 800 meters from the volcano when it began spewing lava and ash. Unlike the residents, they were able to quickly escape with their car, where they kept all their belongings. According to their own statements, they observe lava from a little farther away. But, in doing so, they fell under a rain of hot ash that “burned their arms.” They are now in Los Llanos de Aridan in La Palma, which has not yet been evacuated. (in a)