Home World Visiting the external borders of the European Union: “NATO is on the... 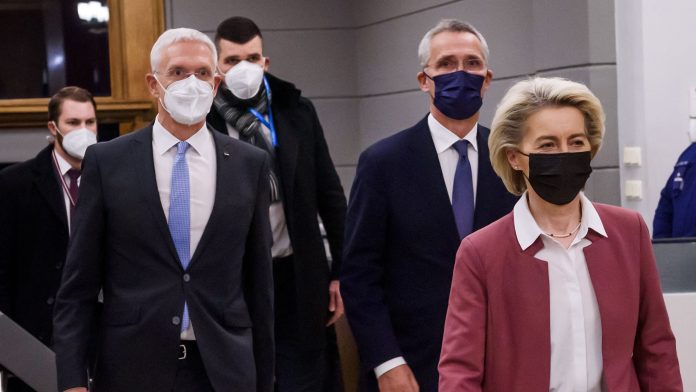 For weeks, thousands of people have been trying to move from Belarus to Poland or the Baltic states. The European Union and NATO have now reassured countries of their support on the ground. On the other hand, Lithuania called for a rethink.

In the migration crisis at the EU’s eastern external borders, the EU and NATO have assured their member states there of their support. “I would like to assure you of the EU’s full solidarity with Lithuania, Poland and Latvia in these very difficult times,” European Commission President Ursula von der Leyen said during a visit to Lithuania. NATO Secretary General Jens Stoltenberg, after meeting with President Gitanas Nausida in the capital Vilnius, also emphasized that no NATO ally was left to fend for themselves.

The European Union accuses the authoritarian ruler of Belarus, Alexander Lukashenko, of targeting people from crisis regions to be flown to Minsk in order to smuggle them into the European Union. Von der Leyen spoke of a “deliberate, cynical, and dangerous hybrid attack”. Stoltenberg said that the Lukashenko regime was using innocent people to pressure neighboring countries. Both announced that they would enhance cooperation between the European Union and NATO.

Lithuanian President Noseda called on NATO to reconsider relations with Belarus. Noseda said that the country’s army is increasingly integrated into the Russian armed forces. “This poses new challenges for NATO, and NATO should adjust its plans, strategy and tactics accordingly so that it is ready to respond.” Noseda said Belarus would continue to test the unity of NATO and the European Union. This also applies to the ability to respond to and counter hybrid attacks.

See also  Giants of the seas are also in Europe: a fossil of a meter-long sea turtle was discovered

Von der Leyen praised Lithuania for handling the crisis. Von der Leyen has announced that the European Union will provide €200 million each to Lithuania, Latvia and Poland for border security this year and next. Stoltenberg, in turn, called on Russia to ease tensions. “NATO remains vigil,” he said. We are ready to defend our allies.” He also referred to the “undeclared and unjustified” deployment of Russian forces on the Ukrainian border. Russia denied such allegations.

EU and NATO leaders pledge solidarity with the government of Lithuania

European Court of Justice: Personal data must be deleted