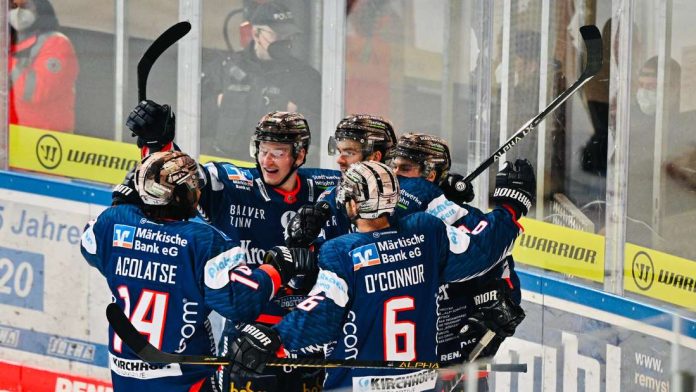 Thanks to a strong second third, Iserlohn Roosters won the Western Derby against Kölner Haie. The Zauranders won 7:3 (0:1, 5:0, 2:2) on their ice against Domstadeers on Sunday night.

Iserlohn – Roosters coach Brad Taber completely rebuilt his squad before the game in order to bring new spirit into the offensive game. The guests were initially not bothered by this. Matsumoto licked Ryan O’Connor’s puck on the blue line, but Andreas Gennick at the Iserlohner Tour was able to stop the High striker at the last minute (2). All in all, the West Derby was relatively shaggy in the first round, with the two teams running out of duels. The sound got a little louder down the hall when Cologne’s Barenka preferred to lock in on a counterattack rather than serve up Matsumoto (15th). In the direct comeback, Casey Bailey did it on his own and failed due to Justin Pogge in the shark chest. When the two teams were nearly friends with 0-0 after the first third, Perez put the disc on target. Jenike could only allow the discus to bounce forward, so Sebastian Overa could take the lead from Cologne (19).

In the middle section everything remained the same for the time being. Cologne played clean – and Sauerland’s side were still wracked with negative experiences in the past few weeks. But then it was time for Eric Cornell. The striker brought the puck towards the cologne from an acute angle – and rolled the disc over Pogue’s shoulder to the goal (26). Just 91 seconds later, Cornell took another action and took the ball into the upper left corner to take a 2-1 lead. Now the Sauerland area is very hot and the sharks have narrowed down to the third sharks. Result: After a great combination, Sena Acolatse scored 3:1 (30) with a shot from her wrist into the corner. The fans haven’t yet returned to their seats, so we can cheer again. Cornell extended the difference to 4:1 with his third goal that evening (30). The Roosters didn’t have enough and in the middle section they made it 5:1 by Broda (36th position). What a third of angry cocks!

See also  "It will be a very difficult match"

In the last round, Cologne coach Uwe Krupp took his goalkeeper off the ice early in the first penalty kick – with success. Oblinger scored to 2:5 from Cologne’s point of view (45). But the Rooster family had the right answer. Captain Torsten Ankert started a counterattack with his pass to Brent Aubin, which the striker completed elegantly by turning Justin Pogge and inserting a puck into the empty goal (48). Although the guests were able to shorten it again to 3:6 by the majority of Marcel Müller, this was nothing more than a cosmetic result (57th place). Shortly before the end of the match, Bailey was still outnumbered by the orphan Hay (59), and about 2,000 spectators in Sileserie were delighted with the derby victory.