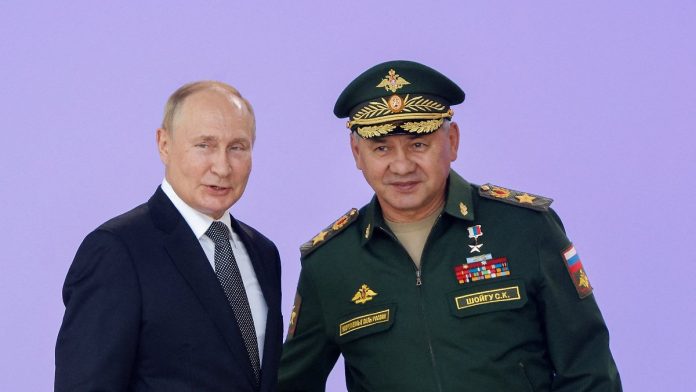 Criticism of one’s army is a criminal offense in Russia. But the recent setbacks in Kharkiv seriously threaten that the search for the culprit continues. Deputy in the State Duma proposes to call Defense Minister Shoigu.

According to a media report, the Russian parliament is considering questioning Defense Minister Sergei Shoigu. The Russian newspaper Kommersant quoted Sergei Mironov, head of the Kremlin’s small Fair Russia party, as saying the State Duma would discuss the matter on Monday. It is not customary for the State Duma to summon a defense minister.

After the Russian army lost large parts of the Kharkiv region of Ukraine to the Ukrainian counter-offensive, the armed forces of Russia have recently come under public criticism. Experts, analysts, bloggers and officials have recently covered the military’s actions on TV shows and online networks with a previously unimaginable devastating wave of criticism.

For example, Chechen leader Ramzan Kadyrov made harsh allegations against the Russian army. And in an audio message he sent to his 2.4 million followers on Telegram, the militant denounced the “mistakes” of Russian generals. If nothing changes, he said, “I will have to contact the Ministry of Defense and the country’s leadership to explain the situation on the ground.”

The Kremlin tried to stop this wave. Kremlin spokesman Dmitry Peskov warned that those who think differently should “obey the laws” that punish people who “disfigure” the army. “It’s a very fine line, you have to be very careful here.” Criticism of the military has been treated as a criminal offense in Russia since the attack on Ukraine.

“Recompile rather than withdraw”

The Moscow Defense Ministry presented the withdrawal of Russian forces as a strategic “regroupment” of its forces, and the ministry initially denied that the Russian armed forces had suffered a defeat. But even Vladimir Solovyov, one of the Kremlin’s most important advocates, recently admitted: “The situation is difficult and dangerous.”

Some Russian soldiers seem to share their doubts about the defense minister. According to the Kyiv Post, the Ukrainians found an old telephone in the liberated towns of the Kharkov region, on which the soldiers wrote “Shoigo”.

The army is not fit for battle?

Above all, what is new is that criticism is now also coming from nationalist groups that previously strongly supported the military operation. Recent setbacks in Ukraine are not the first for the Russian military since it began operations in February. As early as April, they had to withdraw from the area around the Ukrainian capital Kyiv.

But the recent setbacks it has suffered after the more than six-month military operation are particularly painful for nationalist circles. There are only two possible explanations for these bankruptcies, says conservative commentator Igor Kholmogorov: either “we have been betrayed” – or “our army is not combatable.”