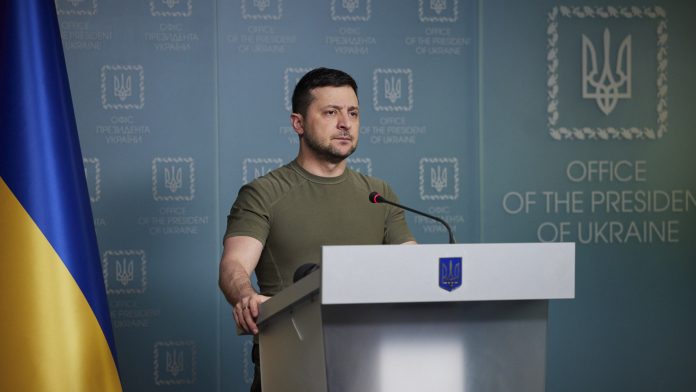 Ukrainian President Zelensky does not want to insist on joining NATO quickly. Instead, he wants security guarantees for his country. He was ready to talk about the status of the occupied territories.

Ukrainian President Zelensky appears to be walking away from his call for Ukraine to join NATO soon. Instead, he wants security guarantees for his country.

Zelensky said in an interview with the American television channel ABC that NATO is not ready to accept Ukraine. “The alliance is afraid of everything that is controversial and of confrontation with Russia,” he said. Zelensky’s Servant of the People (Sloha Narudo) party made a similar statement: “The coalition is not ready to absorb Ukraine for at least the next 15 years and has made it clear.”

The party said that it was therefore time to talk about security guarantees in anticipation of NATO acceptance in the future. “The secured states can become the USA, Turkey and the neighboring countries of Ukraine.” In addition, Russia must affirm without any doubt that it recognizes the Ukrainian state “and guarantees that it will not threaten our state.”

The goal of joining NATO is enshrined in the Ukrainian Constitution. On the other hand, Russia demands neutrality from Ukraine. Selinsky also demanded security guarantees before the Russian attack on Ukraine.

Settlement on Crimea and “people’s republics” are possible

Zelensky and his party were also ready to talk about the future status of the breakaway regions of the Donbass and the Russian-occupied Crimea.

There could be a middle ground, Zelensky said. The important question for him is how people in these areas can live in the future.

However, there is no doubt that Ukraine recognizes the independence of the regions, as Russia demands. His party declared: “We do not even theoretically consider the possibility (…) of giving up parts of our territory. This is unacceptable. Our Ukraine – including Donetsk, Luhansk and Crimea.”

Speech by video call in the British Parliament

In a speech via video call in the British House of Commons, Zelensky drew on Ukraine’s fighting spirit, but also requested more help from Great Britain. For his country, the fight against the Russian army is about to “to be or not to be,” Zelensky said. In view of the stiff resistance, he could now give an answer: “Sure: Be.”

He again called for more sanctions against Russia and a no-fly zone, and Western countries refused to set up that zone several times.

Members of the British Parliament greeted the speech with great applause. Prime Minister Boris Johnson has said the UK will support Ukraine with weapons, sanctions and all diplomatic, humanitarian and economic means to thwart Russian President Putin’s attempt to subjugate the country.