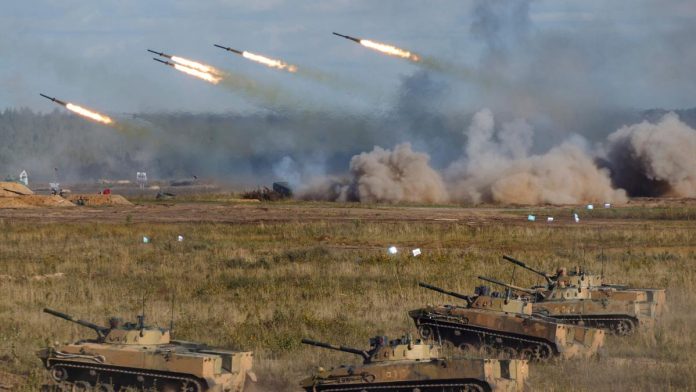 Ukraine warns Russia – the new offensive will be very costly

With Russia massing its forces on the border with Ukraine, fears are growing about a possible attack. Ukrainian Foreign Minister Dmytro Kuleba has now issued a warning: any attack would lead to significant losses – “therefore, it is better to refrain from it.”

DrUkraine warns Russia in the event of an attack on its territory of great political and economic losses, as well as loss of human life. Ukrainian Foreign Minister Dmytro Kuleba said in a televised speech Thursday that the Ukrainian government is trying not to speculate on what is going on in the head of Russian President Vladimir Putin. “We are working to make him understand: A new attack on Ukraine would be very costly, so it’s better not to do it.”

The Ukrainian government is trying to prevent Russia from further aggression. Russia concentrated its forces on its border with Ukraine. According to Ukraine’s Military Intelligence over the weekend, more than 92,000 soldiers – Russia is preparing for an offensive by the end of January or the beginning of February.

The government in Kiev, the United States and NATO also expressed concern about the possibility of a Russian attack. The Moscow government denies the existence of such plans. The United States has already delivered weapons to Ukraine, which has been met with criticism in Moscow.

Relations with Ukraine, which wants to join the Western military alliance NATO, are very tense. In eastern Ukraine, Ukrainian government forces and pro-Russian separatists have been hostile to each other for years.

Russia has repeatedly denied Ukraine’s allegations that it has sent soldiers to eastern Ukraine and supported separatists there. There is a ceasefire in eastern Ukraine, but it is repeatedly violated. The armed conflict dates back to 2014. At that time, Russia annexed the Ukrainian Crimea and justified this by the fact that the Russian population there had to be protected. Previously, the pro-Russian president of Ukraine, Viktor Yanukovych, was overthrown in the course of mass protests.

For years, France, Germany, Ukraine and Russia have tried to bring peace to eastern Ukraine in their talks in the so-called Normandy format. A spokeswoman for the Foreign Ministry in Moscow said that Russia had not turned its back on these talks on the implementation of the peace agreement.

Compromise on infrastructure package: US Senate wants to invest trillions of...