Home World Two-Hour Coup: The Arrest of the President of Peru 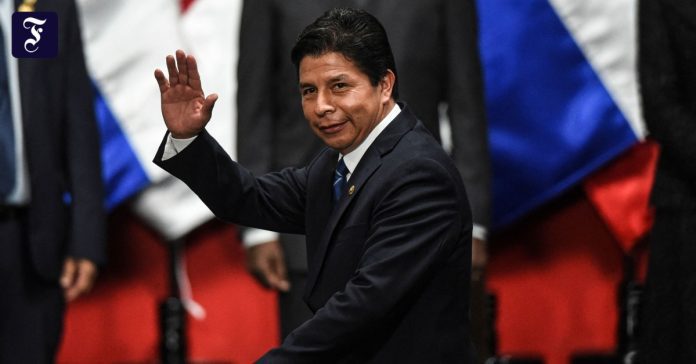 sEru has a female president for the first time. After Congress impeached former President Pedro Castillo on Wednesday night, former Vice President Dina Boulwart took over. Shortly after the congressional vote, the 60-year-old lawyer and politician was sworn into her new office. Bulwart said she was aware of her “grave responsibility”. Their first task is to demand as much unity as possible for all Peruvians. A “political truce” is required to form a national unity government.

Castillo, who has come under fire for allegations of abuse of power and corruption, has managed to escape dismissal twice. It was Castillo’s fault that a third such move met little resistance in Congress on Wednesday. A few hours before the planned vote, Castillo addressed the nation with trembling hands and announced that he would dissolve Congress and declare an emergency government. Castillo also announced a “reorganization” of the judiciary, new elections and a new constitution. “Congress has destroyed the rule of law, democracy and the balance of state powers,” Castillo said.

Remember many things April 5, 1992. It was the day the then President of Peru, Alberto Fujimori, dissolved the Congress in a self-coup, intervened in the judiciary, suspended the constitution and declared an emergency government. Fujimori then ruled in an authoritarian fashion until November 2000, when he left the country after being re-elected for a second time amid allegations of fraud and corruption. Thirty years ago, Fujimori got away with his own self-coup for two reasons: Not only was the army on his side, but also the majority of Peruvians.

A private party distanced itself from Castillo

On the other hand, Castillo alone was trying to overthrow the constitution and the powers of the state. So how did he appear alone after his words. Not only the security forces, the judiciary, and the people’s representatives in Congress spoke about the coup, but also about their government. One minister after another resigned after Castillo advanced. Since the end, even Castillo’s left-wing party “Peri Libre” has distanced itself from the individual effort of its president. Castillo could not count on the population either. According to polls, 70 percent have recently spoken out against Castillo.

Congress convened shortly thereafter as planned and removed Castillo by a vote of 101 to 6, with 10 abstentions. After the vote, the MPs erupted into cheers. Shortly thereafter, the Peruvian National Police posted a photo of Castillo on Twitter showing him inside a police station. Police said they “interfered” in accordance with their duties. Local media reported that the prosecution interrogated him. Rumors had circulated earlier that Castillo and his family may have fled to a foreign embassy. It is not clear what punishment the former president faces.

Castillo’s move was unconstitutional. In Peru, the president has the right to dissolve the Peruvian legislature and call new elections, but only if two consecutive votes of no confidence against the government are passed. This situation did not exist. Castillo’s failed self-coup was not only sharply criticized in Peru itself, but also abroad by many members of the Organization of American States (OAS), which held an extraordinary session on Wednesday.

Castillo, the son of a farmer, former teacher and Andean trade unionist, surprisingly made it to the runoff in last year’s election, defeating influential conservative politician Keiko Fujimori, the daughter of the former president. His tenure has so far been marked by a constant power struggle between the government and the opposition Congress. During this time, Castillo held more than 60 cabinet positions. Political opponents, as well as many analysts, accused him of improvising and not getting the job done. In recent months, allegations of abuse of power and corruption have mounted against Castillo and several close family members and allies. Several indictments have also been issued against the president.

By deposing Castillo, Peru defended its institutions and repelled the coup. But the political crisis in the country, which has been ruled by six presidents for the past six years, remains. Observers assume that Castillo’s successor, Boulwart, who is also left-leaning, will initially have congressional support. However, unless you create a strong coalition to rule the country and address Peru’s many problems, political instability will continue. Sooner or later, this may lead to Peruvians claiming saviors—including those who think least of all about democracy. Opinion polls show that support for democracy in Peru has declined more than other countries in the region in recent years.

Male fertility: Sperm count has halved in the past 45 years