Home World Twitter vortex about Sergey Lavrov: the foreign minister in the clinic? 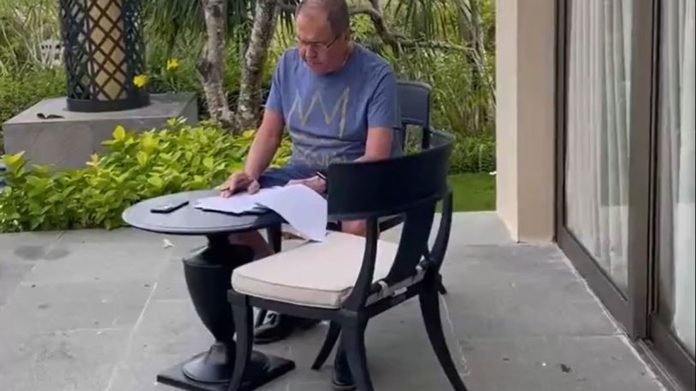 Russian Foreign Minister Lavrov wanted to show how well he’s doing in a video wearing shorts and a T-shirt in the hotel pool. But where was this clip really filmed?

Speculation continues that Russian Foreign Minister Sergei Lavrov is in a clinic in Bali. Some social media users thought he took the video, which is supposed to show his good health, in a hospital building. Their theory has since been largely disproved.

Indeed, on Monday afternoon, Lavrov wanted to show how wrong the Western media was in this assumption. For this he was photographed relaxing on the balcony, in shorts and a T-shirt. The message is very clear: “I’m fine, you are all wrong.”

However, there are now initial reactions on Twitter showing that the photo may not have been taken at a nice hotel by the sea, but in fact in a hospital. Because if you look at satellite images of the local BIMC Hospital Nusa Dua, there are indications that at first glance they seem to be talking about.

I Social network Reddit One user marked different features of Lavrov’s photo and compared it to satellite images of the hospital. Among other things, palm trees, characteristic features of the house and the pool. Of course, this does not say anything about the state of health of the Secretary of State. However, the official version of the Russian Foreign Minister that the rumors about a possible disease are fake is called into question.

Is the hospital theory really correct?

Other voices suggest that the hospital theory is wrong. On Twitter, a user named Manek suggests that Lavrov’s video was actually filmed in a luxury hotel in Bali.

For comparison, post a picture from the hotel’s website Pool area in the “Presidential Villa” at Mulia Resort Indicates. There are lawn chairs, pool chairs and lights very similar to those in Lavrov’s video. The arrangement of the swimming pool and surrounding buildings also matches the surroundings in the section. And they give more clues that this is the minister’s location than a mysterious satellite image of the hospital. The fact that many proponents of the hospital theory have since deleted their Twitter messages is another indication that Lavrov was actually at the hotel when the video was filmed.

After the first media report about Lavrov’s hospitalization, the foreign minister denied the report. “This is a game that is not new in politics,” Lavrov said on Monday. “Western journalists need to get more honest – they have to write what’s right.” A ministry spokeswoman described the information as a “high point of fraud”. The Russian Foreign Ministry then released the video, which was said to show Lavrov on a hotel balcony in Indonesia.

The Associated Press, citing the Indonesian authorities, reported that Lavrov was taken to hospital after arriving in Bali to attend the G20 meeting. The 72-year-old was treated for a heart condition. Bali Governor Wayan Koster told Reuters that Lavrov made a short visit to the hospital in Sangli and was examined there. “He was in good health,” Koster said. After the examination, Lavrov immediately left the hospital.

Will Russia cancel the grain deal with Ukraine?