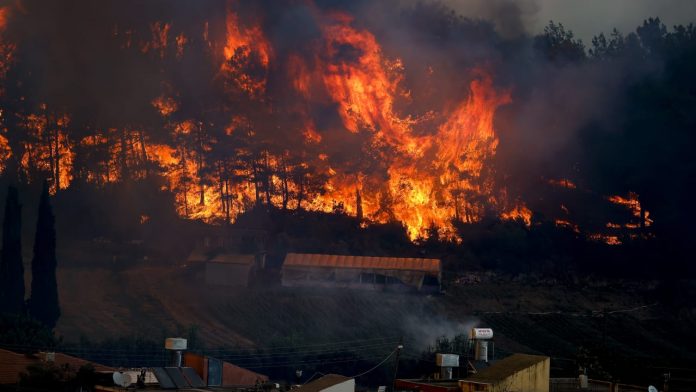 Tongues of flame burning in the Turkish holiday paradise!

Several serious forest fires broke out in the Antalya region.

The director of Manavgat district, Mustafa Yigit, 53, told CNN Turk radio on Wednesday that winds pushed the flames in the direction of residential neighbourhoods.

Three residential areas were evacuated. Dark clouds of smoke and flames were seen one meter high in the pictures. The fire destroyed several houses in the Kalimler region. For now, Yigit said, tourists are not in danger.

Many residents encountered problems due to the development of thick smoke. The politician added that someone should have been treated in hospital for severe burn injuries. No deaths were initially reported.

Yigit denied media reports about the necessity of evacuating a hospital in Manavgat. Clinics in the area have been put on alert.

The emergency services battled the flames from the air and from the ground. According to the governor’s office, two firefighting planes and 15 helicopters are being used.

The district official, Yigit, said reinforcements have been requested from other counties. The cause of the fires was initially unclear.

The mayor of Antalya, about 60 kilometers away, Mahitin Bosik (58), suspected arson.

Eyewitness Marvin Matzola, 28, was surprised by the fires while on vacation in Turkey.

In the Evrenseki community (Manavgat neighborhood) he told BILD: “A sprinkle of ash fell over our hotel. There is a lot of smoke. The air conditioners in the hotels have been turned off so that the smoke does not penetrate too much.”