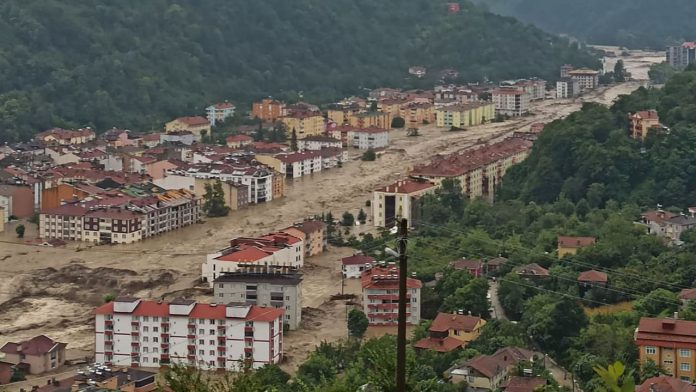 According to new information, at least 38 people died in the severe floods that swept through the Turkish Black Sea region. The disaster agency, AFAD, said 12 people would be treated in hospital.

Parts of Kastamonu, Parten and Sinop provinces have been inundated since Tuesday: roads turned into raging rivers and mudslides buried lanes beneath them. On Thursday, authorities reported that 17 people had been killed.

Television and Internet recordings showed water in some cities rising to the level of street signs. Rescue workers reported that the water was sometimes up to four meters in height and that an area of ​​land over 240 kilometers in length was affected.

Agriculture and Forestry Minister Bekir Pakdemirli said on Wednesday that the region was facing “a catastrophe not seen in 50 or 100 years”. President Recep Tayyip Erdogan, 67, traveled to Kastamonu on Friday and promised to replace the destroyed places with “better places”.

Among other things, about 5,000 emergency services and 19 helicopters and search dogs are involved in the rescue work, with the support of NGOs and the military. 32 people died in Kastamonu, and 6 more in Sinop. The official Anadolu news agency reported that an 85-year-old woman whose house had previously collapsed due to flooding is missing in Bartin.

In the mountainous regions of the Black Sea of ​​Turkey, heavy rain often falls in the summer months, causing floods and mudslides.