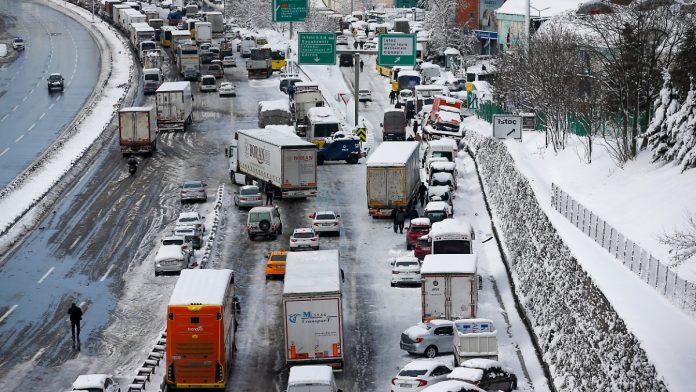 Turkey and Greece are not prepared for such winter events: days of snowfall bring parts of the public infrastructure to a halt in the Mediterranean countries. In Athens, the army released snowmobile drivers. There is an emergency at the airports.

After heavy snowfall in the past few days, there are still major problems in Turkey and Greece. Air traffic from the major airports in Ankara and Athens is only operating on a limited scale, and not all blackouts have been resolved for a long time. Meanwhile, many people have had to stay in their cars at airports, but also on snow-covered highways.

Istanbul Airport partially resumed operations at midday, but many flights are still canceled. A spokesman for the operator said that foreign planes had been allowed to land since noon. However, a regular operation is not expected until late at night. One runway is free, and work is underway to de-ice the other two.

Early on Monday, passengers sometimes had to wait for hours on planes. Meanwhile, travelers stranded at stations protested, chanting “We need a hotel” (roughly: “We need hotels”), videos on social media showed. Bus stops are closed until Wednesday morning, while the situation on the streets of Istanbul is deteriorating – the city center is again impassable, Mayor Ekrem Imamoglu tweeted.

Athens airport is also far from normal operations. Domestic flights, for example from airports in small islands, were canceled in many cases, as were international flights, only a portion of which took place as scheduled on Tuesday. Schools, authorities and stores must remain largely closed until Wednesday. There are still areas where electricity has been cut off because trees have collapsed under the weight of the snow and power lines have been cut.

There have also been huge traffic problems since Monday, especially in the greater Athens area and central Greece. Thousands of drivers had to spend the night in their cars on the highways. The army came to pick up the people and move the vehicles off the road. Recently, on Tuesday morning, about 1,200 people got stuck in their cars in the snow, and some waited up to 22 hours.

The chaos on the country’s highways already began on Monday, when poorly equipped cars and trucks without winter tires and snow chains could no longer block the way for removal equipment. Winter tires are not mandatory in Greece – especially in the Athens region, it rarely snows in winter, and if it does, then only light.