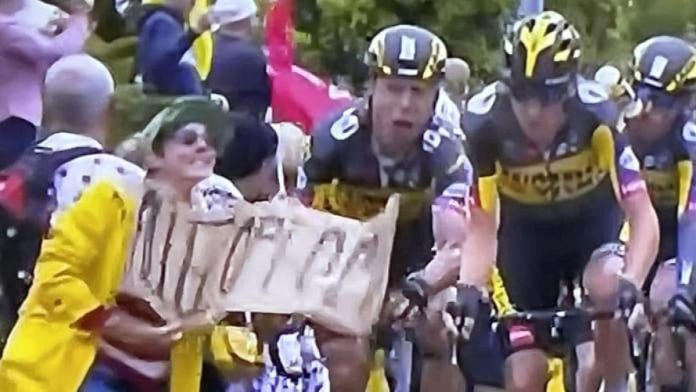 Her photos spread around the world. In the summer, a scene at the Tour de France caused a mass crash when a cardboard banner with the greetings of “Grandfather” and “Grandmother” was carried into television cameras. Now she has been judged.

DrA court in Brest has imposed a fine of 1,200 euros on the spectator responsible for a mass fall at the first stage of the Tour de France in June. Agence France-Presse reported on Thursday.

The woman had held up a large cardboard sign with greetings to grandfather and grandmother on the road in Brittany in the television cameras. Time-tested world champion Tony Martin hit the shield at high speed, causing about 50 other riders to fall.

The woman initially walked away from the scene, but gave up days later. According to the court, she was charged with negligence in bodily harm and endangering the lives of others. Prosecutors had requested four months of probation for the 31-year-old.

The court session said that the defendant understood the seriousness of what she was doing and apologized. The French woman chose the name “Alize Obi-Omi” because of her German-born grandmother. She was sure that the grandparents were watching the tour on TV.

The Tour de France eventually declined to take legal action against the women. However, the International Cycling Federation (CPA) filed a lawsuit. “It’s about promoting more respect for cyclists who have trained for months on the Tour, some of whom can no longer continue,” she said in a statement issued by the CPA.

Barcelona in the last 16 after winning in Napoli | ...