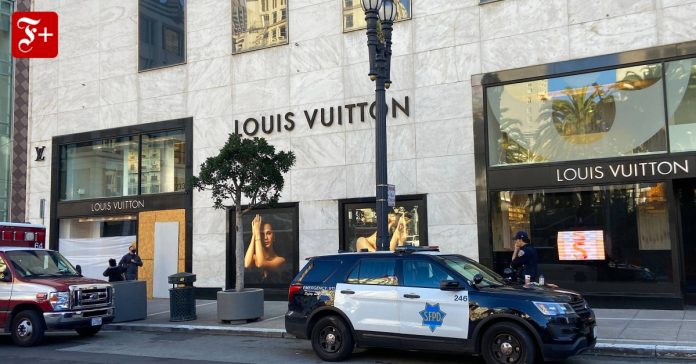 NSIt was like being in a gangster movie, and it all happened so quickly: Last Saturday, shortly before 9pm closed, about two dozen cars suddenly appeared in front of a branch of the Nordstrom supermarket near San Francisco. About 80 people, some masked, disembarked and stormed the shop, some carrying crowbars or firearms. They immediately proceeded to steal the goods, some attacked the employees, and one of the employees was peppered. After a short time they ran again with their prey and drove away at high speed. It didn’t take more than a minute. The police later spoke of a “criminal gang” and an apparently “insolent act” that had been planned. I got there quickly and arrested three more people, but the rest have now escaped.

The audacity of the mass robbery was shocking, but it was by no means an isolated incident. The night before, in the middle of San Francisco around Union Square, there had been a whole series of looting. Groups of thieves raided nearly a dozen stores, including branches of luxury chains such as Louis Vuitton and Burberry as well as some cannabis outlets. Witnesses told a local television station that the Louis Vuitton store was then completely emptied. The San Francisco police chief then said he would do everything in his power to stop this “madness”. Among other things, traffic is now being diverted to make it more difficult for thieves to drive to the doors of some stores. California Governor Gavin Newson announced plans to increase the budget to combat shoplifting. The State Police has its own “working force” responsible for such crimes.

Consequences of Brexit: tens of thousands of EU citizens waiting for...