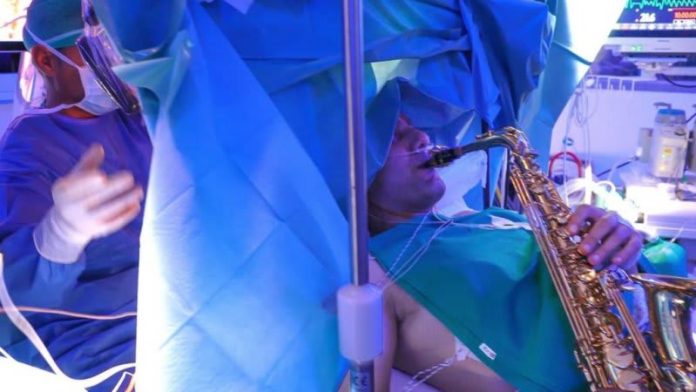 A man plays the saxophone during brain surgery

“We are ready to die,” says the Italian national anthem.

But this patient wanted to live. And so he played – among other things – “Das Lied der Italiener” – on the saxophone during a nine-hour brain surgery. He was fully conscious at the time, according to CBS News.

The man, who his chief surgeon calls Christian Brugna CZ, had a tumor on his head. “It was in a very complex area of ​​the brain,” said the doctor from Paidea International Hospital in Rome. “The patient is also left-handed. This makes things more difficult because the neural pathways to the brain are much more complex.”

A team of ten international experts began working on the 35-year-old while he was fully conscious last Monday. Successfully: Czechoslovakia was not able to leave the hospital until three days later.

During the surgical consultation, the patient said that the most important thing for him is that he can continue to play music after the operation. For Brogna, who claims to have performed hundreds of brain operations with awake patients, the music was an advantage: he was able to check various brain functions during the procedure, such as hand coordination and vision.

The medical team met with Czechoslovakia about six times. This is the only way to guarantee a “customized process,” according to Progna. The surgeon stresses the importance of these measures: “When we perform operations on the brain, we are working on self-awareness. So we have to make sure that we do not harm the patient as a person.”

Before each operation, the step-by-step procedure is discussed with the patient. This ensures that people remain cooperative and not afraid. “Great peace and quiet” is also important in the operating room – in this case the saxophone was made an exception.