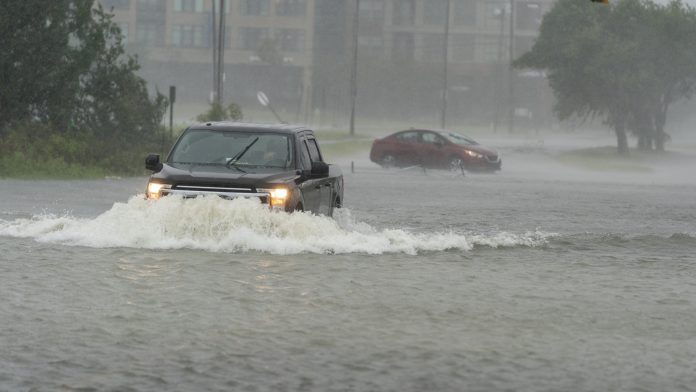 Hurricane Ian made landfall again in the US state of South Carolina with torrential rain. Parts of historic downtown Charleston have been inundated, and meteorologists are warning of storm surge.

Hurricane Ian made landfall again in the United States with winds of up to 140 kilometers per hour. The storm hit the coastal region of South Carolina near the city of Georgetown. Meteorologists warned of floods and storms that could reach a height of two metres.

Parts of the peninsula in historic downtown Charleston were already under water before Ian’s arrival. A state of emergency in South Carolina was previously declared to allow for federal support for relief and rescue work.

The National Hurricane Center also warned of rain and flooding in the neighboring states of North Carolina and Southern Virginia.

This satellite image shows Hurricane Ian over the east coast of the United States.

At least 21 dead in Florida

The second-highest Category 4 hurricane has already demonstrated its destructive power in Florida. There, Ian hit the ground with winds of up to 240 kilometers per hour. The hurricane caused severe damage.

Florida Governor Ron DeSantis said nearly two million homes remain without power. Several areas have been largely cut off from the power grid, one almost entirely. Thousands of people have taken refuge in emergency shelters. Florida authorities currently estimate that at least 21 people have died from the storm. However, there is still no clarity on those numbers, emphasized Kevin Guthrie, director of the Florida Emergency Management Authority.

There are many dangers in the water

The Miami Herald reports that the water in the streets on Key Largo, one of the islands of the Florida Keys chain in the south of the state, is so deep that alligators swim in it. And the authorities warned residents of the flooded areas of the dangers in the water: contaminants from the sewage network, chemicals or even the crocodile.

US President Joe Biden on Thursday expressed his grave fears: “This could be the deadliest hurricane in Florida’s history.”

There is hardly any electricity in Cuba

Three days after the hurricane passed, power had not been restored in large parts of Cuba. The state electricity company UNE said the “deficit in power generation capacity” was expected to continue throughout the day. It was not disclosed how many people were without electricity.

More rain due to climate change?

According to a quick analysis by US scientists, climate change has increased rainfall from Hurricane Ian by more than 10 percent. “Climate change didn’t cause the storm, but it made it wetter,” said researcher Michael Weiner of Lawrence Berkeley National Laboratory. These are “conservative estimates”.

The investigation is a quick preliminary analysis. There has not yet been a peer review process in which the study is reviewed by non-participating experts. Wiener and colleagues compared the weather simulation of today’s Earth to one in which global warming that has already occurred by about 1.2 degrees since the pre-industrial era is ruled out.