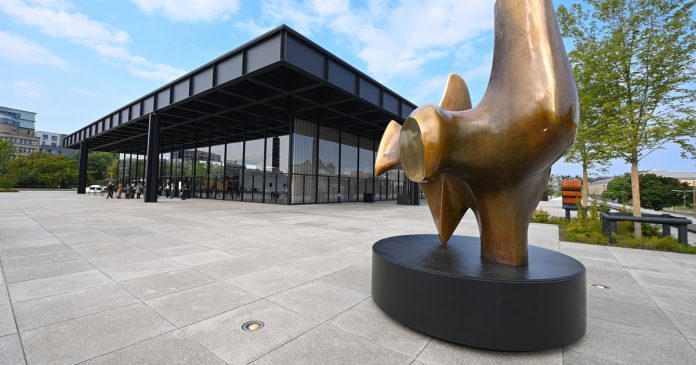 Berlin – The Neue Nationalgalerie in Berlin impressively returns to the international museum scene. After years of renovation behind closed doors, the iconic building of Ludwig Mies van der Rohe (1886-1969) reopens with a Saturday party. The stunning glass and steel building was created by the architect at the end of the 1960s as a museum of 20th century art.

Secretary of State for Culture Monica Grotters (CDU) spoke of “a charming return as a place of pilgrimage for lovers of modern art and as a theater for contemporary artists”.

The team of star British architect David Chipperfield completely renovated the museum from 2016 onwards and overhauled it for €140 million. “Our job was to revitalize the spirit of the building,” Chipperfield said. Renovations remain invisible “as long as we make no mistake”.

“The dreamy building will be preserved even after the renovation,” says Joachim Jäger, director of Neue Nationalgalerie. For Hermann Barzinger, president of the Prussian Cultural Heritage Foundation, Chipperfield set the standard in renovating “the most beautiful museum of the twentieth century.”

The ruling Mayor of Berlin Michael Müller (SPD) noted the historical dimension of the building. Shortly after the wall was built, the Neue Nationalgalerie in West Berlin stood “with a transparent facade of new beginnings and progress, pioneering and modernity, openness and cosmopolitanism.”

The Neue Nationalgalerie is open to the public on Sundays with three galleries. With “Community Art 1900-1945,” a permanent exhibition featuring major works from the Nationalgalerie’s collection of nearly 1,800 works will attract visitors through July 2023.

In the main hall is the exhibition “Alexander Calder. The work of the American sculptor “Minimal / Maximal” can be viewed until February 13. Calder (1898-1976) is also associated with the building through his work “Têtes et Queue” from 1965, which was constructed to open the Mies Building and can be found again on the museum balcony.

With “Rosa Barba. In a Perpetual Now” is the third exhibition dedicated to the artist in Berlin. She also chose a reference to the architecture of the arrangement. The steel construction is based on Mies van der Rohe’s “brick country house” floor plan.

For Grütters, the exhibitions, which can only show a small portion of the collection’s holdings, show a “glaring lack of exhibition space”, particularly in Berlin as the city of turmoil and awakening in the twentieth century. This is why the Museum of the 20th Century by Swiss Architects Herzog & de Meuron is currently being built next to the new National Gallery, which is also controversial due to the high construction costs of 450 million euros so far. Both buildings will be connected underground.