Home World The conflict in Ukraine: The Pentagon fears a Russian attack 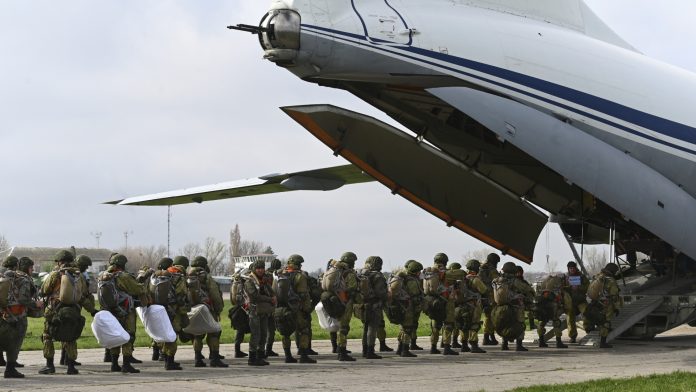 According to a report by US intelligence, Russia is planning an attack with up to 175,000 troops in the conflict with Ukraine. Washington Post reports. Half of the soldiers are said to have already moved to the border.

Up to 175,000 soldiers and 100 tactical battalions, including tanks, artillery and equipment: This is what the Kremlin’s plan to attack Ukraine looks like, according to a Washington Post report. The newspaper notes, among other things, a US intelligence report it has.

Accompanying satellite imagery shows that Russia is amassing troops and equipment at four locations near the border with Ukraine. Already 50 tactical battalions with about 70,000 soldiers have been transferred. According to the newspaper’s report, the Russian armed forces are currently assembling in four points. Movements toward and away from the border are intended to obscure the tactical approach and create uncertainty.

US intelligence agencies are ‘extremely concerned’

At the beginning of next year, Moscow wanted to be ready for a possible attack that could come from several sides. US intelligence was “deeply concerned about indications that Russia has falsified plans to take aggressive actions against Ukraine.” Pentagon spokesman Tony Semmelroth said Washington supports “further de-escalation in the region and a diplomatic solution to the conflict in eastern Ukraine.”

US President Joe Biden has warned his counterpart Vladimir Putin amid concerns about troop deployments and increasingly aggressive rhetoric from the Kremlin. Biden said he was preparing “the most comprehensive and significant series of initiatives to make it very difficult for Mr. Putin to do what he so fears.”

The US government has been warning for days of a possible Russian attack on Ukraine and is threatening to impose sanctions. Moscow denies and accuses NATO of stoking tensions in the region. Biden and Putin could try to defuse the situation directly next week. According to the Russian Foreign Ministry, a video link is being prepared between the two presidents.

Ukraine fears an attack by Russia in a few weeks. “The most likely time to prepare for an escalation is the end of January,” Ukrainian Defense Minister Oleksiy Resnikov said on Friday. Ukrainian intelligence is currently analyzing all possible scenarios.