Home entertainment Thanks to ‘Stranger Things’: Metallica hit the charts after 36 years 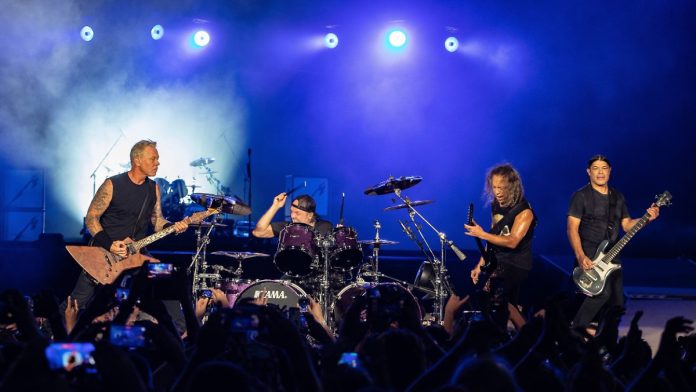 Thanks to Stranger Things
Metallica hit the charts after 36 years

Netflix series “Stranger Things” relives the 80s. With “Running Up That Hill,” the show has already revived a song, the season finale now breathing new life into classic rock.

After Kate Bush’s “Running Up That Hill,” Stranger Things made another hit from the ’80s into the charts. Metallica’s hit 1986 hit “Master of Puppets” enjoyed a new hit on the UK and US charts more than 35 years later after being played in the fourth season of the Netflix series. Eddie Monson’s character (played by Joseph Quinn) picks up the guitar and performs the blow in the loop.

“Master of Puppets” is currently ranked 12th on Spotify’s Top 50 in the US and 15th in the UK, and the eight-minute song Metallica is ranked 26th in the global top 50 for streaming services. In Germany, the film “Master of Puppets” has not yet reached the charts.

Metallica bassist Robert Trujillo announced via Instagram that his 17-year-old son Tay has collaborated on the new version of the song for the show. There the musician wrote: “This is my son! Proud of you, Tai.”

The final two episodes of the fourth season of “Stranger Things” were released on Netflix on July 1 and immediately set new records. According to reports, there was sometimes such a rush that users were temporarily unable to use Netflix.

The Sun claims to have learned that an entire musical theater was planned due to the hype surrounding the music. According to the report, Netflix bosses have already secured UK trademark rights for a “live theatrical, musical or comedy show” of “Stranger Things”. In addition, one has applied for trademark protection for food, beverage and chewing gum. There is no official confirmation from Netflix yet.

Anniversary comedy: The Queen shoots a segment with Paddington Bear

Iris Klein: Your daughter-in-law has a court order against you