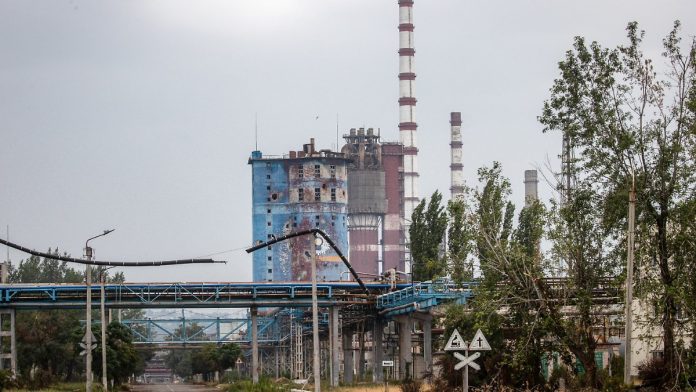 When heavy fighting was still raging around Sevgerodonetsk, hundreds of civilians were detained at the Azot Chemical Plant. The city is now under Russian control. It looks like the rest of the workers should now go back to the factory. Ukraine warns of a catastrophe.

It appears that Russia wants to restart the badly damaged nitrogen chemical plant in occupied Sevgerodonetsk. According to Ukrainian sources, the remaining workers were forced to return to their jobs. This was reported by Anton Gerashchenko, adviser to the Minister of the Interior of Ukraine.

He warned on Twitter that the factory was badly damaged during the fighting. Control and security systems are no longer intact again. According to Gerashchenko, the restart could lead to a “technological disaster”. The plant produces ammonia, ammonium nitrate, and nitric acid, among others.

After heavy fighting, Russia captured the eastern Ukrainian city of Sevgerodonetsk at the end of June. At that time, hundreds of civilians were holed up in the Azot plant, which had been converted into an air raid shelter. Many of them were evacuated by pro-Russian separatists. The Russian side said at that time that they had been transferred at their request to Starobilsk, about 50 kilometers northeast of Sevgerodonetsk.

Russia has long claimed in the past that Ukrainian militants held civilians hostage at an nitrogen plant until the city was captured. The Ukrainian side denies this, and rather, they repeatedly accuse the Russian forces of forcing Ukrainian civilians to leave the occupied territories by sabotaging the escape routes to the territory controlled by Ukraine or completely blocking them.

Tank mess!: The French are not getting any more fuel |...