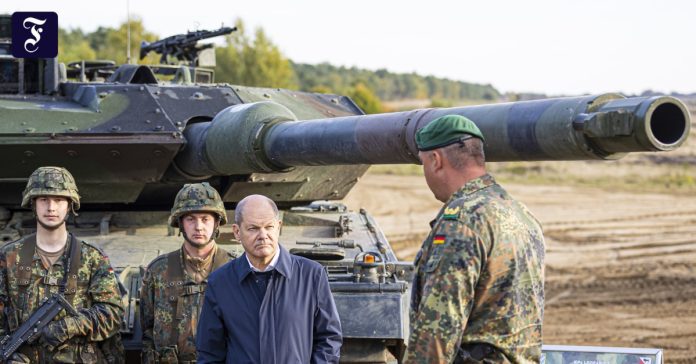 DrThe United States has indicated to the federal government some time ago that it would agree to deliver German Leopard 2 main battle tanks to Ukraine. Two sources with access to classified information from two countries told FAZ, the US President’s National Security Adviser, Jake SullivanI already informed the foreign policy advisor of the Federal Chancellor, Jens Plotner, in October.

Political correspondent for the Sunday newspaper Frankfurter Allgemeine in Berlin.

The federal government has not denied information about Sullivan’s references to Plotner. And a spokesperson said only that you stand with the allies, especially United States of America, “In constant contact on joint efforts to support Ukraine.” However, the details are “secret”. It has also been said of government departments that each state decides for itself what to give. Federal Chancellor Olaf Scholz has repeatedly stressed that Germany is acting in unison with its closest allies. “So far, the United States has not delivered any Western-style main battle tanks to Ukraine either,” he added.

Experts say, however, that there are good arguments for Ukraine To deliver German tanks first. For example, Gustav Gressel of the European Council on Foreign Relations points out that the Leopard 2 is the standard tank for the Polish Army. Therefore, Ukraine could have tanks of this type serviced across the Ukrainian border in Poland. This is not yet possible with American tanks. “There are pragmatic reasons to say: Leopard 2 first,” says Gressel.

From the inventories of manufacturers Rheinmetall and Krauss-Maffei Wegmann alone, Germany could supply 80 units on short notice. Another 30 pieces will be used in the Bundeswehr Combat Training Center to represent enemy tanks. It can be exchanged for Russian-made tanks from Ukrainian stocks.