Home World Stuck in lava flows: Drones are supposed to save the dogs of... 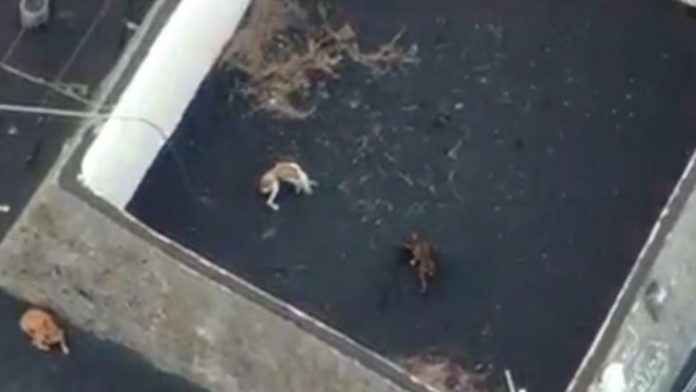 A drone is supposed to save the dogs in La Palma

Since the Cumbre Vieja eruption, massive lava flows have been pouring over the Canary Island of La Palma. As a result, four dogs were isolated from the outside world. Now the four-legged friends will be evacuated by drone. But its use carries risks that are difficult to calculate.

With an unprecedented drone rescue operation, aides on the Canary island of La Palma want to rescue four dogs trapped among lava flows after the Cumbre Vieja volcano eruption. The Spanish drone company Aerocameras is working hard to prepare for the rescue. “We have no experience flying a live animal by drone – nobody else has it,” company president Jaime Pereira confirmed on private radio Telecinco.

According to animal rights activists, the use of drones is the only chance to save the four dogs alive. Animal welfare organization Leales.org became aware of the four-legged friends trapped among lava flows at the beginning of October – and then organized the animals’ supply of water and food by drone.

Leales.org also came up with the idea to use one of the Aerocameras cargo drones for the rescue. Reaching the animals on foot or by helicopter is not possible due to the glowing lava and clouds of ash and gas at Cumbre Vega, said Alejandro Molina, a spokesperson for Leales.org. Drone rescue is “the only way to do it”.

A drone is supposed to catch dogs with a net

The Aerocameras team has been working on La Palma since Monday. The authorities on the Canary Island had previously given the green light for the extraordinary rescue operation – according to Spanish law, drones are in fact not allowed to transport people or animals. It is still not clear when exactly the drone will be used. According to the rescuers’ plan, the dogs will be captured individually by a net connected to the 50-kilogram drone and taken to safety.

It remains to be seen if this will work as well. It all depends on the dogs’ reaction to the drone, Pereira said. “The dog can respond by running, moving or jumping.” The Aerocameras CEO said there are also warning sounds warning that dogs may injure themselves or suffer a heart attack. “Of course there are all kinds of risks. But we either get them out of there or they won’t be around in a few days or weeks.”

Cumbre Vieja volcano, located 15 kilometers west of the airport, erupted on September 19 for the first time in 50 years. Huge amounts of lava have flowed towards the sea since then and have already destroyed more than 760 hectares of land including about 2,000 structures. About 7,000 people had to leave their homes due to the natural disaster.