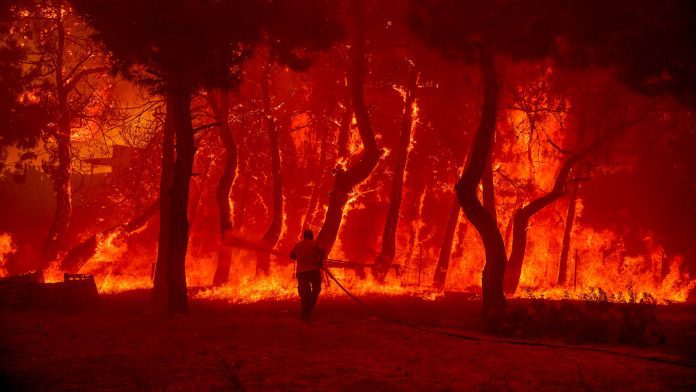 Wildfires continue to burn in parts of southern Europe: in Greece, a village near the burning Dadia National Park has been evacuated. It also continues to burn on the holiday island of Lesvos. A fire in Spain caused concern in Tenerife.

Huge fire in Dadia National Park in the northeast Greece It rages uncontrollably. The village of Dadia was evacuated during the night, and in the morning the army and forest workers were deployed to cut the passes through the pine forests thus preventing the flames from spreading further. Extinguishing operations continued on the ground and in the air. 320 firefighters were deployed with 68 fire engines. According to the Civil Protection, all available helicopters and aircraft are currently being used to fight fires throughout the country.

Fire continues on the island of Lesvos

A large fire on the south side of Lesbos, where a village had been evacuated the day before, also remained uncontrolled. Police said two hotels and more than 90 homes were evacuated in the coastal town of Vatera. A total of 450 people were brought to safety there. The Coast Guard had earlier announced that they had evacuated the beach. At least two homes in Vatera were destroyed in the fire, according to information from state television station ERT.

Meanwhile, another village on Lesvos was evacuated due to the fire. At noon, the residents of the village of Frisa located on the southern side of the island were called to leave the village. Several homes and cars have already fallen victim to the fire. The smoke was so thick that it could be seen from space. This was announced by the European Earth Observing System Copernicus on Twitter and posted a corresponding satellite image.

According to the fire department, 141 fires were recorded across Greece in 24 hours. Among other things, a substation of the State Electricity Company near the city of Larissa in Thessaly caught fire. Authorities continue to assess fire risk as high. Meteorologists announced a rise in temperatures to 40 degrees and a drought in the coming days until the beginning of August.

A fire is preparing in Spain Tenerife takes care. Late in the evening, regional president Angel Victor Torres said the fires had already destroyed more than 2,150 hectares on the Canary Island popular with tourists. 585 residents of La Guancha and four other communities in the north of the island have been moved to safety. Many foreign hiking tourists have been warned of the flames in nearby Teide National Park.

The approximately 150 emergency services have recently made significant progress in fighting the fires, also thanks to the high humidity and weak winds. The high temperatures announced for today and Monday, up to 38 degrees, are alarming. “So we have to put out the fire as quickly as possible,” Torres said.

All wildfires in Spain are now either extinguished or largely under control – with the exception of the Tenerife fire and two fires that broke out on Saturday in Yunquera, northeast of Madrid, and in Olmeda del Rey, southeast of the capital, and are being fought by a total of 235 emergency services.

Drought and heat in Spain for months

Combined with months of drought and strong winds, the heat helped start and spread many fires, according to the Aemet Weather Service. 2022 is already the most devastating year of wildfires in Spain since records began. In the first seven months of the year, the fire destroyed about 200 thousand hectares.

Forest fires are also raging France Next: However, firefighters in the southwest of the country were able to control a fire eleven days later. On Saturday, local authorities said the fire was now contained. So thousands of residents of the municipality of La Teste du Buch, who have been moved to safety in the past few days, can return to their homes. However, apart from another major fire in the area, the fire brigade has not yet been able to clear everything up. The fire is no longer spreading in the municipality of Landeras, according to the Gironde prefecture. However, there are still about 30 active sources of fire and there is a danger of the fire breaking out again.