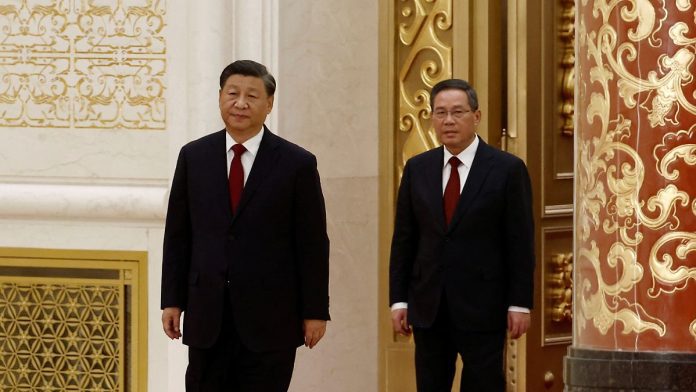 In Chinese politics, ancient groups are considered more important than professional qualifications. Hardly any of the other cadres in the Communist Party benefited from this unwritten law as much as Prime Minister-designate Li Qiang. This is not good news for the world.

First of all: Li Qiang is a bright mind. The next Chinese prime minister has a university degree in industrial engineering and has worked steadily his way up the party hierarchy. This includes sufficient intelligence and instinct to avoid political mistakes. However, what he lacks is in-depth knowledge of economics. It is true that Li has already taken a number of courses in world economics at the Central Party School. But he lacks the deep understanding of global relations that his predecessor, Li Keqiang, brought with him as a doctor of economics.

As an indicator, Chinese stock markets reacted to the reshuffle of the Communist Party (KP) power circle with a sharp fall in prices. However, a lack of economic understanding on the part of the leadership elite is not the only one responsible for this. Instead, the shock persisted that General Secretary Xi Jinping, along with the future prime minister, could now consider six members of the Politburo Standing Committee at his side, who are described as loyalists.

Such a combination of elements is dangerous in a system in which opponents at the highest level of the party are punished with serious allegations of corruption. Whether out of fear of such consequences or out of gratitude for political progress – loyalists are more likely to come to terms with automated consent than to question the competence of their adoptive father.

But if everyone tells the ruler only what he wants to hear, the probability of making wrong decisions increases. Given the importance of China to the world economy, peace or the fight against climate change, the consequences of such wrong decisions have affected the whole world for a long time. That was why Li Qiang’s figure caused such a headache to many observers.

Increases the risk of errors

The prime minister-designate and party leader for life have become very close in the past. A nearly 20-year-old photograph shows Li Qiang and Xi Jinping posing side by side in front of the cliffs of Nanji Island. The island is located off the coast of east China’s Zhejiang Province, where the two politicians covered some parts of their careers together.

When Xi was in charge of party fortunes in Zhejiang, Li initially represented the interests of the Chinese Communist Party in its economic hub in Wenzhou. Subsequently, Li served as general secretary of the county-level Party Committee for many years. But long after Xi had moved to Shanghai to prepare for his ascension to the top of the country, Li Qiang had to wait a long time.

The powerful organization of the Communist Party, whose cadres are maneuvering from one position to another across the country so that they can prove themselves to higher tasks, immediately suspended the 63-year-old. Li’s rapid rise, which culminated last Sunday with his appointment to the second place in the Politburo Standing Committee, only became clear after Xi Jinping led the country for years.

With Li’s appointment to the Party’s Politburo and Party Secretary in Shanghai, Xi paved the way for his disciple to join him in 2017. But even these promotions would not have qualified him sufficiently for the position of head of government, according to decades-old practice. Because traditionally he has always been one of the four deputy prime ministers who have been promoted.

KP occupies all neurons of the state

However, Lee cannot be officially appointed prime minister until next year, when the National People’s Congress, the government body, convenes. Officially, party and state are still two different things. But in practice, the party occupies all the neurons of the state.

Since Sunday, there has been speculation about the future scope of the next prime minister’s job. His shortened career path without a deputy prime minister station means two things. For one thing, Li Qiang has little experience on the international stage, which is a challenge given China’s growing importance in the world.

On the other hand, Li clearly had Xi Jinping to thank for the fact that he would be soon where no one expected him. It also means that it depends on the Secretary General. “Lee does not have a particular political record to support him, so he is well aware that he owes his position to Xi. Whatever Xi orders him to do, he will do,” predicts Willie Lam of the Jamestown Foundation in Washington in Britain. “guardian”.

While incumbent Premier Li Keqiang can be confident of the support of the Communist Party Youth League, Li Qiang has no support from any well-known faction in the party’s power structure. This greatly reduced the likelihood that he would be able to free himself from Xi Jinping under the circumstances.

He closed me – regardless of losses

However, the new Li also brings the qualities that Xi needs. He proved it when he put the megacity of Shanghai under lockdown in the spring. Against all odds, Lee kept the city closed for months. Because of the large number of foreigners in Shanghai, who have expressed their bad and sometimes dramatic experiences around the world via the Internet, the pressure on Li was especially high. But he continued as the head of state apparently ordered: regardless of the losses.

“He has proven to me that he is a loyal implementer of Xi’s no-Covid policy,” says political scientist Chen Daoyen, a former professor at Shanghai University of Political Science and Law. However, there are also reports that Lee has stumbled when it comes to strict implementation of the lockdown. How great the dispute between Beijing and Shanghai really was is the speculation. However, whether Lee would actually be considered prime minister if he strongly advocated for a different policy is highly questionable.

During his time in Zhejiang, later in Jiangsu and Shanghai, Li Qiang also gained a reputation as an actor who embraced middle-class interests. In Zhejiang, he launched an initiative aimed at making the country’s small cities more attractive to entrepreneurs. Such methods were well received by Shi. He wants income to be distributed more equitably in China to avoid social unrest. Small town economic development seems like a good idea.