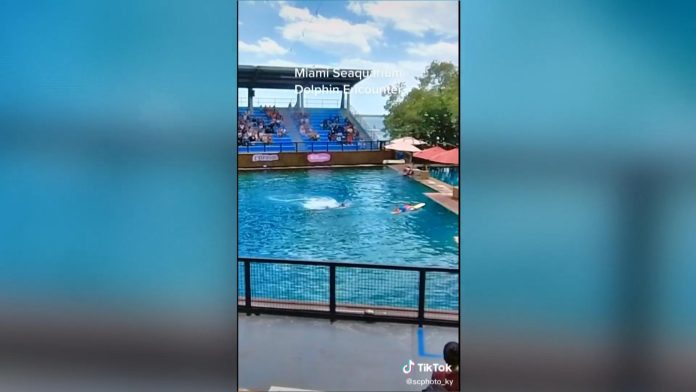 A dolphin attack in the Miami Aquarium shocked the world. A recording of a dolphin show in which a marine mammal suddenly attacks its trainer is spreading online. The locals are screaming, realizing how dire the situation is. The coach managed to get out of the pool in time. Now a dolphin protector explains in an interview with RTL why this attack came as no surprise to her.

Are dolphins kept in very small tanks in an aquarium?

Sundance is 23 years old and has lived in the Miami Seaquarium his whole life. Time and time again, marine mammals have to put up with their trainers. But last Saturday, Sundance attacked his coach. Children watch this scene especially dramatically. The Miami Aquarium has long been criticized for cruelty to animals.

The zoo is said to be violating the Animal Welfare Act time and time again. The animals are likely to be kept in very small tanks, and the living conditions are similar to a prison. Dolphin protector Verena Platt Till of the Save Dolphin Society eV explains when asked by RTL: “Dolphins are highly social animals that cannot be kept in a species-appropriate manner in captivity, due to the basic and natural behavioral requirements of the animals they cannot cope with the situation.” Also, captive dolphins will not display their normal behavioral repertoire.

In dolphins or therapy facilities all over the world, one gets the impression that one can swim with dolphins without hesitation. Conservation of dolphins continues to ignore the fact that marine mammals are not lovable gamers, but rather predators, that is, predators with complex requirements.

The expert stresses that captive dolphins are often thrown together at random. This is not compatible with normal life. Animals will have no way of escaping the stress. “Aggression arises and marine mammals sometimes hurt each other,” the expert explains. As a result, the animals in such dolphins are sedated with sedatives, according to Verena Platt Till in an interview with RTL.

She is somewhat surprised that such incidents do not happen very often when you imagine how marine mammals must live or how they are kept. “Their tanks are often not big enough. The US standard is nine meters long and 1.80 meters deep and therefore very small.” In the wild, dolphins can dive 600 meters and swim 100 kilometers, depending on the species.

In addition to aggression, dolphins often develop stereotypes and behavioral disorders, the animal rights activist continues. “This also includes this hard push, or push back, as you can see in the video. This pattern of behavior is often found in treatment facilities.” There, marine mammals are constantly exposed to human touch.

Seaquarium criticism: chlorinated water attacks the skin of a dolphin

According to Verena Platt-Till, feeding them is not species-friendly either. “Marine mammals catch dead fish, and they must be sprayed with water and mixed with vitamins and other additives to ensure an adequate supply.” The water in which they swim is “rich” in chlorine and attacks the skin of the dolphin.

Animals have to “perform” at all times especially in such facilities which serve to entertain the tourists. But dolphins also need their rest and dip to sleep. The sleep-wake cycle follows different rules than humans follow.

The incident at the Miami C Aquarium wasn’t an isolated case, according to a dolphin conservation activist. “There is no proper position in captivity.” Your organization is asking to finally end the torment of dolphins around the world. So that dolphins can live peacefully in their natural environment.

Miami Seaquarium paints a different picture of itself on its website. There is talk of “making the world a better place,” “cleaning the beaches,” and taking full care of the animals. “Everything we do goes back to the basic principles of conservation and care,” she says. However, Delfin Sundance’s aggressive behavior clearly shows that this was not successful enough.

The Intergovernmental Panel on Climate Change: What experts are recommending to...