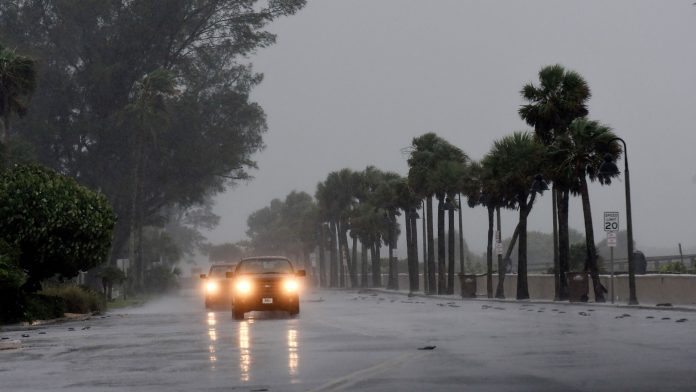 Tropical Storm Ian hit the west coast of Florida. Floods with a height of one meter were observed in several cities. Authorities have warned of ongoing power outages and extensive damage to infrastructure.

Hurricane Ian made landfall on the west coast of the US state of Florida. The US Hurricane Center said the center of a hurricane of strength four out of five hit the coast near the city of Cape Coral. It is therefore a “very dangerous hurricane” that is likely to lead to storms up to meters high, flooding and torrential rain.

Florida Governor Ron DeSantis said some storms were about three and a half meters high. Weather experts fear that it will grow more than five meters in height at the top.

The authorities warned of the expectation of serious damage to the infrastructure and communication lines, and widespread and continuous power outages. Evacuation instructions have been applied to 2.5 million people in the region.

More than a million families without electricity

Television footage showed how rain was falling on the streets and that only the roofs of cars were coming out of the floodwaters and debris flying in the air. Florida Governor Ian said he is likely to make the list of the five deadliest hurricanes in Florida. Residents were urgently warned not to leave their homes on Thursday morning, for example to assess the damage. Even if the hurricane gets away, there is still a risk of debris, broken power lines and the like.

According to the Poweroutage website, about 1.6 million homes have lost power. The authorities expected serious damage to infrastructure and communication lines. The scale of the devastation should become more and more evident as the sun rises. Although the hurricane gradually weakened, a strip of land over a hundred kilometers wide experienced violent storms along its path.

Forecasters warned that Hurricane Ian’s destructive force could continue as it makes its way to the state’s east coast on Thursday. Hurricane strength increased significantly over the Gulf of Mexico on its way toward Florida, and with winds of about 240 km/h, it was just below the threshold of the highest category hurricane.

Experts feared a wide range of severe damage on the hurricane’s path across the US state. The first photos and videos on social media have already shown severe flooding in the cities of Fort Myers Beach, Cape Coral and Naples, some of which were several meters high.

DeSantis said authorities are standing by for rescue and repair operations as soon as the weather permits. He wrote on Twitter that about 7,000 National Guard soldiers and 179 aircraft or helicopters could be deployed. In addition, more than 40,000 technicians from utility companies were already on hand to repair power lines.

National Hurricane Center Director Ken Graham confirmed that it will likely take 24 hours after making landfall for the hurricane to pass over Florida. This means 24 hours of heavy rain. Dean Cresswell of the US disaster agency FEMA said the area expected to be affected by the storm had not seen such a hurricane in nearly 100 years.

UN Secretary-General António Guterres described Ian as “another example of the dramatic climate action that we are witnessing around the world with increasing frequency and increasing devastation”.

Governor: It will be “very ugly days”

Florida Governor DeSantis had previously prepared residents in his state for severe damage from approaching Hurricane Ian. “This is a big, powerful storm,” DeSantis said. “It will cause a lot of damage,” he warned. The Republican politician predicted that the next day or two will be “very ugly” until the hurricane passes over Florida. “It will be a difficult path.”

Meanwhile, a boat carrying migrants from Cuba sank off the coast of Florida on Wednesday. The US Coast Guard was looking for 23 people, it was announced on Twitter. Four migrants had previously arrived on Stoke Island off Key West by swimming from a boat in stormy weather.

Ian made landfall in Cuba on Tuesday as a Category 3, Category 5 hurricane. The Cuban government said two people died in the hard-hit province of Pinar del Rio after their homes collapsed. In the state of 11 million people, electricity was cut across the country.