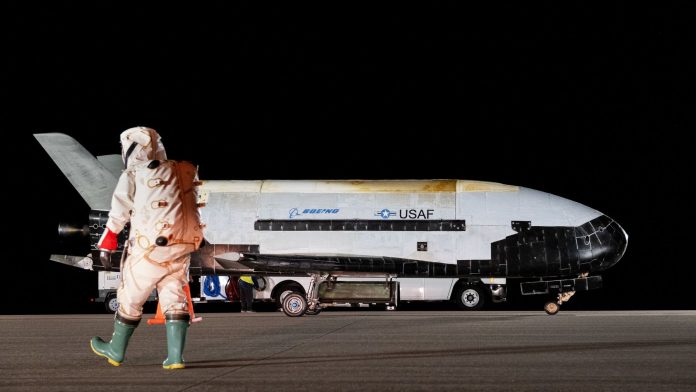 The US space glider X-37B landed on Earth after more than two years in space. The aircraft built by Boeing broke many records.

The US space shuttle X-37B is back on solid ground after more than two years in Earth orbit. This was announced by the manufacturer Boeing. The plane landed at NASA’s Kennedy Space Center in Florida and successfully completed its sixth mission.

What military tasks the space glider mastered in space is unknown. Boeing built the aircraft for the Space Force, which is part of the US Department of Defense.

Only That Much: Experiments in space included a solar energy experiment developed by the Naval Research Laboratory. It is said to be an attempt to convert sunlight into microwave energy and transmit it to Earth as electricity, He writes for technology magazine “The Verge”..

In addition, a satellite from a US Air Force Academy military facility is said to have been exposed during the 2021 mission, NASA reports. The satellite, called FalconSat-8, is still in orbit today.

In addition, NASA is said to have studied the effects of conditions on the craft on seeds on the space glider. Boeing said the experiment is dedicated to researching future interplanetary missions and establishing permanent bases in space.

With its flight, the X-37B set several records at once. With 908 flying days, it is the space glider with the longest time in space. The previous record was 780 days in orbit, which was also set by X-37B.

In addition, the reusable spacecraft flew more than 2 billion km and spent 3,774 days in space. This is also a record for such a glider.

According to Boeing, for the first time there was a service module on board in order to increase the number of payloads that will be carried in a space glider. Boeing wrote that the unit detached before re-entering Earth’s atmosphere “to ensure a safe and successful landing.”

Looking like a smaller version of NASA’s space shuttle, the X-37B spaceplane first flew into space in 2010. On its penultimate mission, the space shuttle launched several small satellites and returned in 2019 after 780 days.