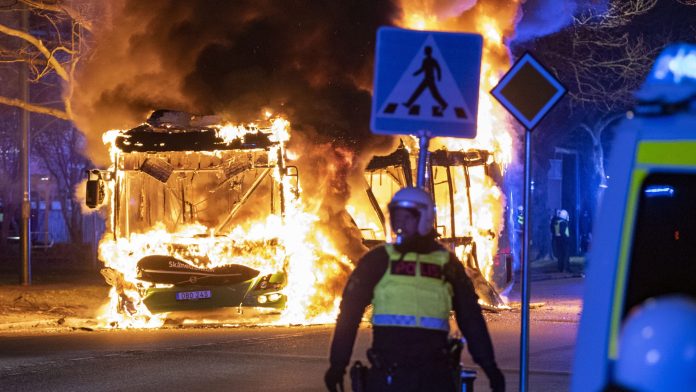 Islamophobia leader Stram Kors announced that he wanted to burn the Koran at a demonstration. Opponents protested that Swedish authorities had approved the far-right rallies. There were riots.

In Sweden, violent protests erupted in several cities on Saturday night and Sunday night after a far-right party was allowed to hold rallies.

Swedish radio SVT reported that cars and garbage cans were burned in Malmö, and a bus caught fire after a burning object was thrown. Stones and Molotov cocktails were also thrown at police officers. There were no reports of injuries.

The protests erupted due to rallies organized by the Danish right-wing party, Stram Kors. Their party leader Rasmus Palaudan announced that he also wanted to burn the Koran. In Linköping, he was said to have done the same, and in other places he apparently stayed with the advertisement.

The protests emerged in Malmö after the originally planned event in the city of Landskrona was moved to Malmö due to the riots. According to the police, about 100 young people, mostly young men, threw stones and set cars, trash cans and tires on fire in Landskrona. After the transfer to Malmö, protests escalated there as well. Party leader Baludan was stoned and wounded.

On Easter Sunday, riots in connection with right-wing demonstrations continued. In Norrköping in the south of the country, police said they fired warning shots. Radio “SVT” reported in the evening that a man was wounded in the leg. 13 were arrested in total. Police said they were attacked.

There have already been protests in various cities in the past few days after Stram Kurs announced the rallies, including in Stockholm and Norrköping. Police cars were set on fire in Örebro on Friday.

A party that wants to contest the parliamentary elections

The far-right Baludan holds Danish and Swedish citizenship and plans to run with the Swedish branch of his party in parliamentary elections in late summer. In Denmark, Stram Kurs advocated the banning of Islam and the expulsion of non-Danish people.

Baludan’s burning of the Qur’an also sparked an official reaction from Malaysia. The foreign minister of the Muslim-majority island state said the measure had crossed “moral limits and standards of the right to freedom of expression”. She added that this fuels hatred “which must be rejected by all those who seek peace and promote peaceful coexistence.”