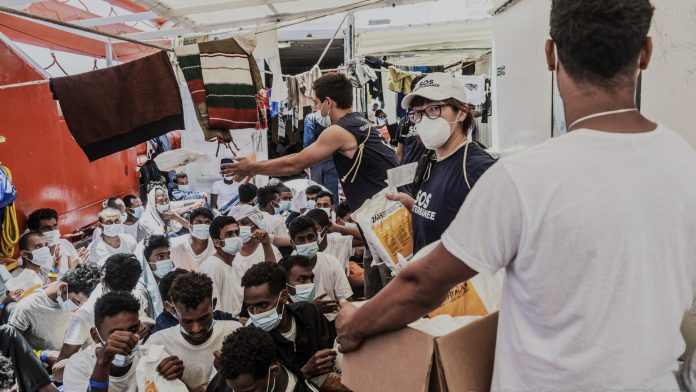 The rescue ship “Ocean Viking” with more than 570 refugees on board has been allowed to dock in Sicily. The operating organization had previously made an urgent appeal to the European Union. There are also 183 minors on board.

The SOS Méditerranée private ship, the “Ocean Viking”, is allowed to enter the port of Augusta in Sicily with more than 570 migrants on board. The organization announced this in the evening.

According to her own statements, the crew has asked authorities in Malta and Italy to allocate a safe port since Monday. SOS Méditerranée, operator of the “Ocean Viking”, appealed to the European Union on Wednesday to find a safe haven.

About 600 refugees are allowed to go ashore in Sicily

The people on board had to be brought to shore “as soon as possible”. They were dehydrated and exhausted. She added that 183 minors were among the refugees, “including disabled children.” “It is comforting to know that your ordeal at sea is coming to an end,” the organization said.

Several other lifeboats have been laid

Migrants were rescued from ordeal in the central Mediterranean. The Ocean Viking was the only ship there for the last time in service by private organizations, and other ships are currently being held by authorities or awaiting departure.

Recently, the Ocean Viking brought more than 230 refugees to Sicily at the beginning of May. Many migrants from countries like Libya or Tunisia make their way to the European Union, often in overcrowded boats. According to the International Organization for Migration, about 900 migrants have already died at the dangerous crossing over the Mediterranean since the beginning of the year. Experts also assume a large number of unreported cases.