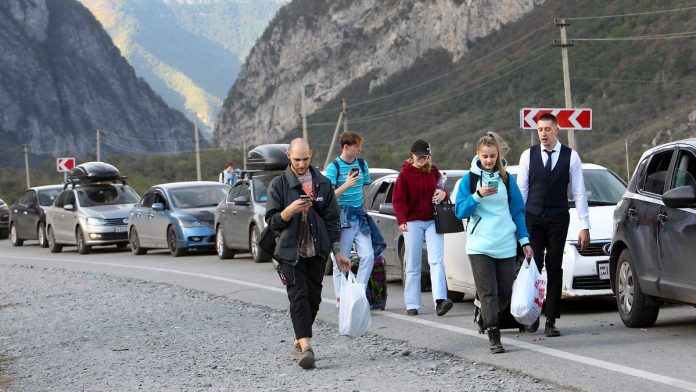 After all, Russian President Putin has already achieved one thing: since the partial mobilization was announced a week ago, tens of thousands of his compatriots have fled the country. According to information from London, there may be more Russians than the invasion of Ukraine in February.

It is clear that the partial Russian mobilization is not going according to plan. Since its announcement by President Vladimir Putin a week ago, there has been a massive exodus of Russians seeking to evade conscription. Like the UK Ministry of Defense on Twitter WritesWhile the exact numbers are unclear, “it likely exceeds the size of the entire invasion force sent by Russia in February 2022.”

According to the ministry, “the wealthy and educated” are over-represented among the refugees. The consequences could be dire for the Russian economy: “Together with the reservists being mobilized, the effects of reduced availability of workers and accelerated brain drain on the Russian economy are likely to grow in importance.”

The Internet portal of the newspaper “Novaya Gazeta” now banned in Russia and critical of the Kremlin, citing sources in the presidential administration, reported that more than 260,000 Russians had already left the country by Sunday. The number is likely to be much higher now. According to estimates, Moscow deployed about 150,000 soldiers on the border with the neighboring country before the deployment.

Since its announcement, the partial mobilization has led to protests and mass exodus from Russia. Those without papers to enter the European Union – the majority of Russians – flee to visa-free countries such as the former Soviet Republic of Armenia or Turkey. However, many destinations – even remote ones – were inaccessible for several days due to lack of flights or other destinations with tens of thousands of euros hard to reach.

The Russian authorities also responded to mass immigration: for example, they restricted access to an area on the border with Georgia. The leader of the Russian North Ossetia region, Sergei Miniglu, signed a decree restricting the passage of passenger cars through the region, with the exception of local residents and tourists. The authorities also set up a “mobile” recruitment office on the border with Georgia to intercept those trying to evade conscription by the army.