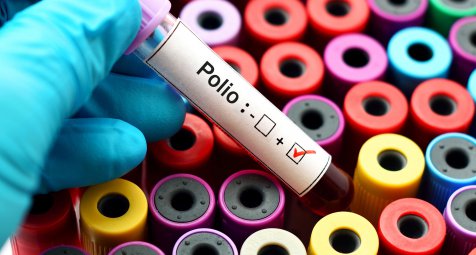 LONDON In London, one million children are set to receive a booster dose against polio after the pathogen was discovered in the sewage of the British capital. Today, the British Department of Health announced that revaccination against polio is recommended for all children between the ages of one and nine years.

Polio was common all over the world until a vaccine was found in the 1950s. The infectious disease is now considered to be eradicated in most regions of the world. In the UK, the last case was recorded in 1984.

Oral polio vaccination protects fully immunized people from infection, but can infect other people through feces contaminated with vaccinate viruses in wastewater. The resulting virus variant, although weaker than the wild poliovirus, can still cause serious illness and paralysis in unvaccinated individuals. Young children are particularly affected.

The authorities in London have not yet identified any new cases. However, results in several sewage treatment plants indicated that there was some level of transmission of the virus in these areas, which could spread to neighboring areas, the ministry said.

Polio expert Kathleen O’Reilly worries about the local spread of the polio virus. People with missing or incomplete immunization are most likely to be affected. According to the World Health Organization (WHO), the polio vaccination rate in London is just under 87 percent, which is just below the rest of the country. © afp / aerzteblatt.de

Why does a cold make you sick?

Symptoms, duration and treatment – what helps?