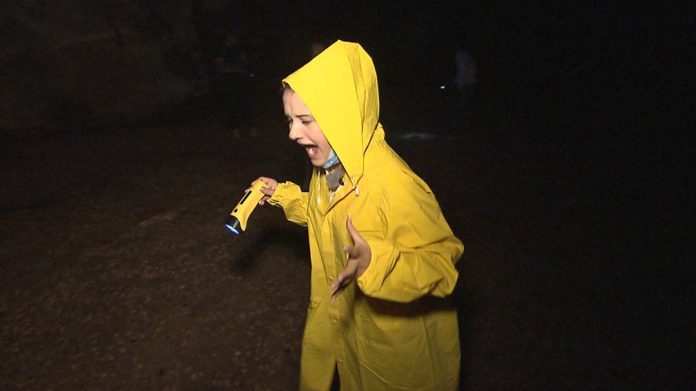 In the Dominican Republic, the current episode (Monday, 8:15 p.m., RTL II) includes a ride for “Die Geissens”: the whole family goes to “Monkeyland.” Here you can experience monkeys up close. Shania Said: “I love monkeys! I would have two: I would call one Royce and the other Rolls.” But their expectation turned into a panic within minutes: Carmen and Shania were barely sitting on a bench when the monkeys attacked them.. They climb on their heads and shoulders. And they feel everywhere.

Robert watches the scene amusedly from a safe distance: “They defecate and pee in one go, but my girls don’t even notice,” he smiles. Shania suddenly cried: “One of the monkeys is biting my ear!” With her eyes closed, she does not realize that it is Robert who is deceiving her: he pinches his daughter’s earlobes with great amusement. “…Or is this my father?!” Shania finally sees through the situation. After visiting Monkeyland, there was no longer any talk of monkeys as pets: “I almost wet my pants because I was so scared!”

On the other hand, Carmen has a lot of fun with animal companions. The 56-year-old also knows why: “I love monkeys. I also have three spider monkeys in my family with Robert, Shania and Davina,” she says with a wink.

A day later, the Geissens show’s next animal adventure continues: They want to go down to a cave where bats sleep. Problem: They’re not the only ones who have made themselves comfortable underground. Carmen suspected what to expect and stopped in front of the entrance to be on the safe side: “I’m not going there. There are supposed to be fat spiders there!”

See also  Watch "Club of the Red Ribbons - How It All Began" again: Felix Binder feature film as a repeat

Shania and her best friend Julia dare to go with Robert. As soon as they walk a few steps, you can hear piercing screams. Shania spotted a spider and could barely breathe upon seeing it: “I had a panic attack,” the 16-year-old explains. After a few minutes it is still going.

“It is very unlikely that our children will become amateur cavers.”

The next cry comes from her sister Davina: The tour guides have discovered something on the floor of the cave. “what did you find?” Davina wants to know. However, when Jess’s daughter answers, it’s all over: “Snake!” Screaming, Davina runs away from the cave, and is closely followed by Father Robert, because he, too, is disgusted with reptiles. Carmen’s conclusion after this trip: “Well, maybe our kids won’t become cave experts.”

The fact that the 56-year-old is the most laid-back when it comes to dealing with animals comes to light later on the quad trip to the beach: She quickly takes a dog that was chasing quads with her in the front seat. With the driver’s animal assistant, he then travels at a leisurely pace across the beach. “I think I can work here as a sitter,” Carmen laughs.