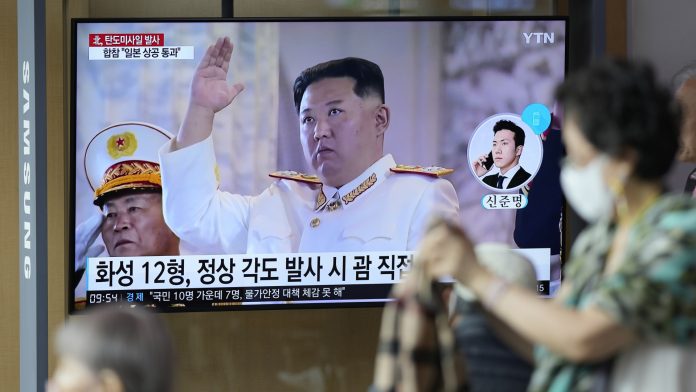 The United Nations regards the North Korean missile launch into the Sea of ​​Japan as a “clear escalation”. US President Biden spoke of “a danger to the Japanese people”. The UN Security Council could meet on Wednesday.

United Nations Secretary-General Antonio Guterres condemned North Korea’s renewed missile test. “This is clearly an escalation and something the Secretary-General condemns,” spokesman Stephane Dujarric said in New York. The denuclearization of the Korean Peninsula is essential. The unity of the UN Security Council on this issue is “very important”.

Pyongyang launched a medium-range ballistic missile toward the Sea of ​​Japan (Korean: East Sea). This is the first time that a North Korean missile has flown over the Japanese archipelago in nearly five years.

The United States also strongly condemned the latest missile test conducted by North Korea. The White House said Japanese Prime Minister Fumio Kishida and Biden described the experience in a phone call as “a danger to the Japanese people.” It is about “destabilizing the region and a clear violation of United Nations Security Council resolutions.”

See also  Starlink: Elon Musk's satellite internet is being used to launch attacks against the Russians

According to the White House, Biden and Kishida agreed to continue to closely coordinate their “immediate and long-term response” bilaterally and with South Korea and the international community.

South Korean President Yoon Seok-yeol said such “reckless nuclear provocation will be met with determination by our military, our allies and the international community.” The United States and South Korea responded not only with verbal criticism of the missile launch, but also with joint military exercises over the Yellow Sea, the so-called marginal sea of ​​the Pacific Ocean, bordered by China and the Korean Peninsula.

After the missile launch this morning, Japan briefly put the population of the country’s northeast on alert. North Korea had already tested two short-range ballistic missiles on Saturday.