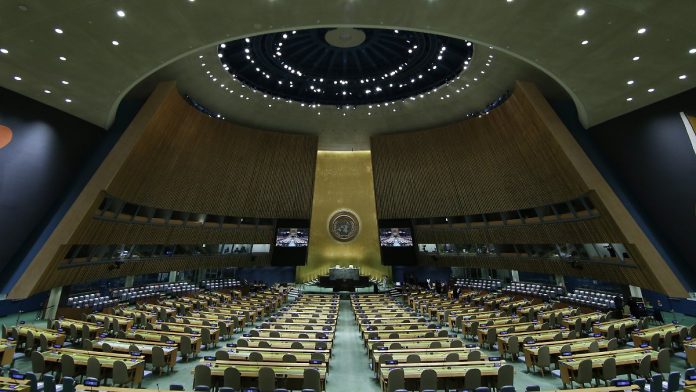 Rejection of the official request

The Taliban are not allowed to speak at the UN debate

Who represents Afghanistan in the United Nations? The Taliban want to do so in the public debate on Monday. But their official request was unsuccessful. It remains unclear who will speak for the state in New York in the future.

Despite their request, the Taliban is unlikely to appear in the general debate at the UN General Assembly. The representative officially registered as Afghanistan’s spokesperson for Monday is the former ambassador to the United Nations, Ghulam Isakzai. This was announced by UN spokesman Stephane Dujarric.

After taking power in Afghanistan, the hardline Islamist Taliban movement applied to the United Nations to formally represent the country on the UN podium – whether through a speech at the current public debate or by nominating an ambassador designated to replace Isakzai. The decision on this is now up to the responsible UN Accreditation Committee. But so far, there has been no scheduled meeting of the commission, which is why the former ambassador to Afghanistan retains his position at least temporarily.

The committee is made up of representatives from nine member states – the USA, Russia, China, Sweden, Namibia, the Bahamas, Bhutan, Sierra Leone and Chile – and decides the representatives, and thus which leaders of the countries are recognized by the United Nations. In practice, the commission is dominated by Washington, Moscow and Beijing.

The Taliban seized power in Afghanistan in mid-August. Former President Ashraf Ghani had previously fled the country. Germany, the United States and other Western countries are in talks with them but do not recognize them as legitimate governments.

See also  Shark fin caught by the box: in Asia it is considered a delicacy - news abroad

Detour through Germany: According to Gazprom, Poland will continue to buy...