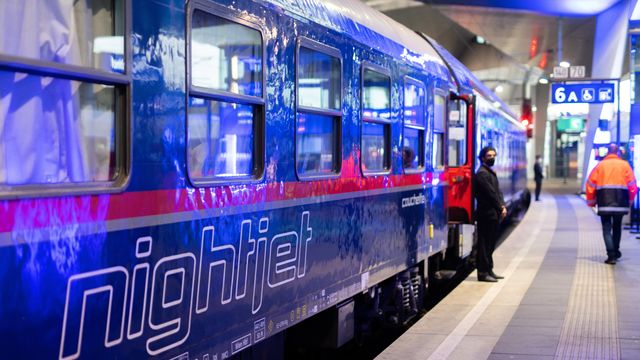 Last but not least, the climate crisis has made night trains with sleeper cars more interesting again. This is one of the reasons why two new overnight flights will be launched on Monday. But some connections are still missing.

At the end of the 19th century, the world-famous night train “Orient Express” operated by the Belgian businessman Georges Nagelmakers ran for the first time. With upholstered sofas and decorative items, the luxury train sponsored by the Belgian king was a novelty.

The comfy bedroom trip across Europe, for example from Paris to Istanbul today, was something special – and affordable only for the wealthy.

Subsequently, travel through Europe by rail also became among the bourgeoisie. Other rail companies now use the name “Orient-Express” – although the trains did not have the luxury equipment the Nagelmacker used to. According to a spokesperson for the Austrian Federal Railways (ÖBB), trains called “Orient Express” are running until 2009.

Night trains in the direction

New flights should now give a boost to night train travel once again. From December 13, these trains will operate on the routes Vienna – Munich – Paris and Zurich – Cologne – Amsterdam, such as Deutsche Bahn Announced at the beginning of a joint attack of night trains by European railway companies. The show should extend to other avenues in the coming years. “Through Nightjet, we offer a climate-friendly alternative for short-haul flights within Europe,” Andreas Matthä of ÖBB’s board of directors said of the new offer.

Given the climate crisis, we can do more Night trains It could actually be a good development: CO2 emissions when traveling by train are lower than when traveling by plane. Night trains can replace many trips – but lately there have been fewer and fewer such trips over the years. “If Deutsche Bahn canceled the night train, people would fly,” says Joachim Holstein.

See also  The government crisis in Italy: The Draghi government threatens the beginning of the end

A former night train host at Deutsche Bahn and a night train activist knows the developments in European night trains at the end of the 20th century. There were “fantastic routes”, for example from Hamburg via Innsbruck and Brenner to Verona and Venice or through the Swiss Alps and the Cinque Terre to Livorno. The trains used to run more often and you could choose longer tracks.

Holstein says that as a train conductor, he traveled a lot on night trains and also used them privately. “Night trains are highly connected,” he says. “The conversations that took place in the corridors.” The food cart is also a popular meeting place. You can experience Europe on the night train – not only on the train itself: the air that flows when the doors are opened also changes over the course of the track.

Low cost airlines And remote buses The railroad has become a contender, according to a spokesman for the Allianz Pro-Chinese transportation alliance. Demand for trips in sleeping cars or vans has fallen. High-speed trains also resulted in night train cancellations. One of them was the night train between Amsterdam and Paris: after the introduction of the French high-speed train Thalys, it was discontinued, as can be read on Randelhoff’s blog.

Speed ​​alone is not always the answer, says Bastian Kettner of Verkehrsclub Deutschland. “If I get somewhere at night and then I don’t have a connection, calling doesn’t do me much either.” It is important to have a fast connection everywhere – for example to go from Lisbon to Moscow or from Stockholm to Naples.

Not only communications need a comprehensive system. If there is no cooperation, Kettner says, it is necessary to purchase additional tickets for individual railway companies. In the event of a delay, it will then be difficult to confirm the rights of passengers for a continuous flight across many countries.

Marion Jongbloth from Consumer Counseling Center The Bundesverband believes there is interest in offering a good night train. The Head of the Mobility and Travel Team sees an urgent need to re-engineer these communications from the point of view of the consumer and in order to protect the climate.