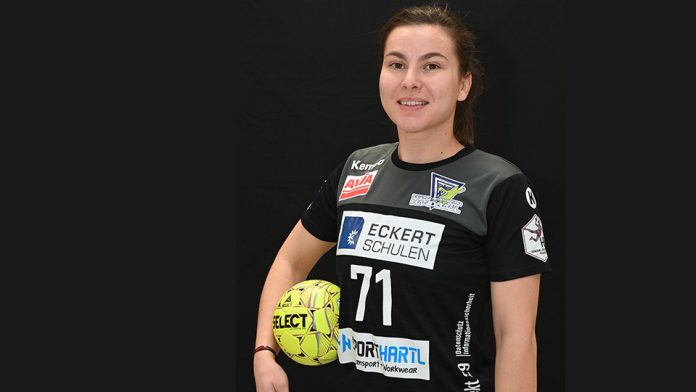 The second division that promoted ESV 1927 got a new addition: 25-year-old Diana Stefan will support the basement ladies as the new wing. Her partner’s job brought her to the gates of Regensburg. When she moved, Stefan was particularly attracted by the opportunity to play in a higher category once again at the leading Bavarian club in women’s handball.

The left-hander took her first steps in handball at LPS Banatul Timisoara Sports School. At the age of fifteen, she left her hometown and moved to the elite center of CNE Ramnicu Valcea in Romania. There she won three national championship titles and was named to the youth national team of her country.

After two and a half years, she returned to her homeland with a knee injury and played for the CSS Timisoara team in the second division. Then the birth of her daughter Risa caused a break from handball, which now ended the aspiring athlete.

Coach Csaba Szücs is pleased to be a replacement for the regular Nicole Schiegerl on the right wing: “Despite the years-long handball break, it was already noted in the first practice session that Diana is an excellently trained player with many throwing variants.”

Hopes for the early premiere

Stefan hopes she will soon be able to play her first match in the second highest German league: “I am happy to play performance-oriented handball here in Regensburg and will do everything in my power to integrate myself personally and of course sportingly as soon as possible.” The first use of the match is scheduled to take place at home on Saturday, 27 November, against HSV Solingen-Gräfrath 76. She will support her team with the number 71 jersey.

VS RWE scene: The Fortuna coach takes pride in his team