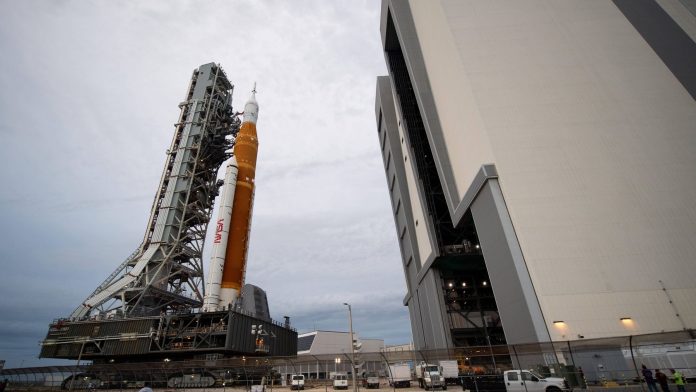 NASA is making a new attempt to launch its SLS lunar rocket. The start date is set for mid-November.

Roughly two weeks before the next planned attempt to launch NASA’s crisis-ridden “Artemis 1” moon mission, the US space agency wants to return the SLS (Space Launch System) rocket to the launch site this week.

NASA has announced that the so-called “start-up” at the Cape Canaveral Spaceport in the US state of Florida will be completed on Friday.

A launch attempt is planned for November 14 at around midnight (local time). The next alternate dates will be November 16, 19 and 25. It’s a test flight of the unmanned spacecraft to the moon.

So far, the mission has not been under a good star: in the summer, two attempts to start failed – among other things, due to a leaky fuel hose. In addition, not a single engine can be cooled to the desired temperature. After that, the giant rocket was pushed into the assembly hall.

Problems also arose in the previous “Artemis” tests, which ultimately led to a significant delay in the project. With the program, named after the Greek goddess of the moon, American astronauts should land on the moon again by 2024, for the first time a woman and a non-white person.

Meanwhile, NASA has ordered suits for the lunar flight from Axiom Space. The US company, which is already working with NASA on commercial space station modules and sent four amateur astronauts to the ISS in April, was selected in the first such tender, NASA said. The order value is approximately 229 million US dollars (233 million euros).