Home World Much faster than expected: the Arctic is threatened by massive ice melt 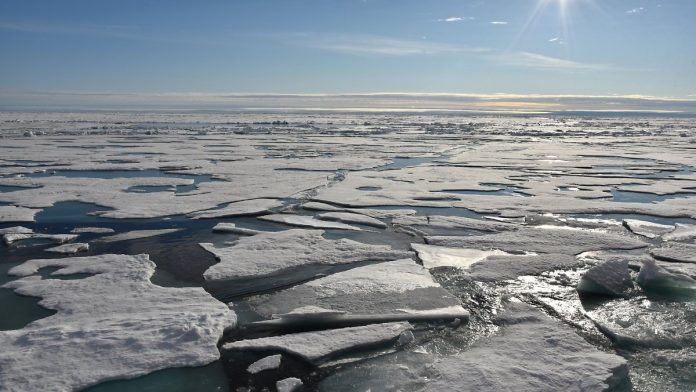 Much faster than expected

The Arctic threatens to dramatically melt the ice

Arctic sea ice is melting faster and faster due to global warming. A new study shows that floating ice is receding twice as fast as previously thought. Earth is losing its natural heat shield, with dire consequences for the world’s climate.

British climate scientists have sounded the alarm in a new study, warning of a melting Arctic ice. Sea ice thickness in coastal regions of the Arctic is declining 70 to 100% faster than is generally assumed, according to the specialist journal “Cryosphere” Published study. Arctic sea ice is keeping the Earth cooler — so its disappearance will exacerbate climate change from the point of view of scientists. “In our view, our calculations are a huge step forward when it comes to a more accurate interpretation of data from satellite data,” said Julian Struve, study co-author and professor at University College London (UCL).

According to the scientist, the temperature of the affected Arctic region is three times that of the Earth as a whole. To determine the thickness of sea ice, scientists measure the portion of the ice that protrudes from the ocean. However, the values ​​are distorted by the snow that lies on the conglomerates and pushes them down. For their study, the University of California researchers said they used more recent satellite data from the European Space Agency (ESA) than in previous studies, and combined it with calculations from a new climate model they are developing with the United States. Scientists from the University of Colorado.

“Previous measurements of sea ice thickness were based on a snow map that was last updated 20 years ago,” said PhD student and lead author Robbie Mallett. “Because the sea ice starts to form later this year, the snow above it has less time to build up,” he said. The study he and colleagues presented considers this phenomenon for the first time. The result is that “sea ice is disappearing faster than we thought.” Mallet stressed that the thickness of the sea ice is an “important indicator of the health of the Arctic.” The thick layers of sea ice acted as a kind of thermal insulation that prevented the Arctic Ocean from warming the Earth’s atmosphere in winter.

On the other hand, in summer, the rafts protected the ocean from solar radiation. “Thin ice also has a lower chance of surviving during the summer Arctic melt,” Mallett said. Melting Arctic ice is also fueling geopolitical tensions in the region, as neighboring countries see opportunities to develop previously unused resources and the potential for new sea routes in the disappearance of pontoons.

At a meeting of foreign ministers at the end of May, eight countries bordering the Arctic, including the United States and Russia, agreed to peaceful cooperation to combat global warming.

See also  Alaska: A man injured and chased by a bear - rescuers find him through the SOS Embassy - news abroad