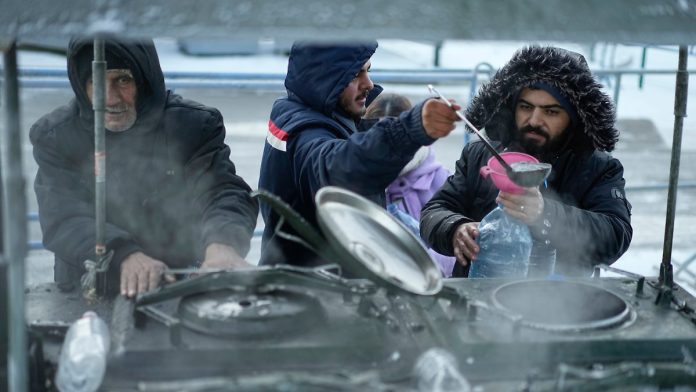 Hundreds remain at the border between Poland and Belarus

Compared with the situation in the fall, the situation on the Belarus-Poland border has now eased. But hundreds of migrants are still waiting in the area. They usually have the same goal.

Hundreds of migrants and refugees in Belarus will remain at the border with Poland in the new year – in the hope of being accepted into the European Union. 600 people were housed in an emergency shelter in a logistics center warehouse in Brusgi; The Belarusian Red Cross in Minsk said upon request that they would be helped. Among them are men, women and children. Many of them make Germany their destination; Last week, at least one man who had been stuck at the border for a long time managed to enter the Federal Republic, the German news agency (dpa) learned from the Iraqi-German family.

Counter-sanctions also took effect in Belarus on Saturday in response to sanctions from the European Union, the United States and other countries. As of January 1, a large part of the goods from the West are prohibited from being imported. The ban on food purchases affects meat and dairy products, among other things. According to the government in Minsk, this is a reaction to “discriminatory policies and unfriendly measures being taken in relation to our country.”

Relations with Russia are closer

The ban mainly affects food producers in the European Union. You are experiencing a loss of income. According to the Belarusian government, manufacturers in Western countries that imposed sanctions on Minsk earned the equivalent of about half a billion euros last year. Belarus is now expanding its economic ties with neighboring Russia. The European Union had previously imposed new sanctions on those involved in the smuggling of migrants. The USA, Canada and Great Britain also adopted punitive measures.

The European Union accuses Belarus of deliberately bringing people into the country from crisis areas and then pushing them to the borders with Poland, Lithuania and Latvia. People have been waiting there for months, hoping to continue their journey to Europe. Governor Alexander Lukashenko of Belarus is under criticism in the West for using immigrants to destabilize the situation in Europe. According to the border guards there, Poland alone recorded about 40,000 illegal crossing attempts on its border with Belarus last year.