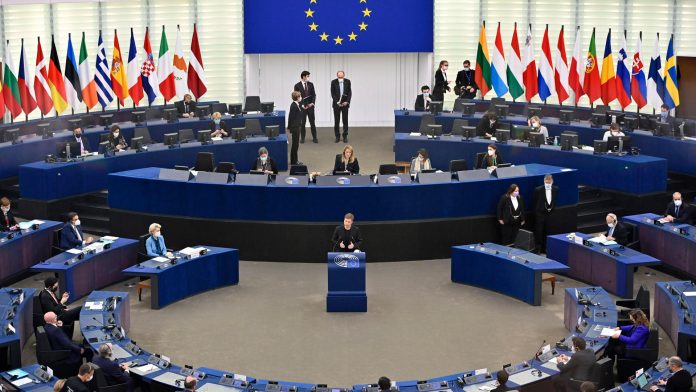 The European Parliament put the rule of law on its agenda on Wednesday. One of the MPs seemed upset by the discussions: he raised his right arm in a clear sign.

Bulgarian MEP Angel Jambaski of the European Conservatives and Reformists has caused an uproar in the European Parliament. During his speech, the EU skeptic made an initially nationalist remark: “We will never allow you to tell us what to say and what to do.” “Bulgaria, Hungary, Urban, Fides and Europe live as nation states,” he said. Then in a video he is shown walking up a round staircase and making the Nazi salute – and walking.

On Wednesday he had European Court Poland and Hungary objected. Both countries have been threatened by the European Union with cutting off funding if they continue to violate European principles of the rule of law. The judges dismissed the complaint from the two states.

Angel Dzambazki has been a member of the European Parliament since 2014. He has drawn attention in the past to derogatory statements against Roma. During the discussion, he said, “No sane person would say that neither Hungary nor Poland have a functioning constitutional state.”

President of the European People’s Party in Parliament, Manfred WeberHe condemned the action on Twitter: “It is the opposite of what the European Parliament supports and we call for immediate action.”

See also  Stuck in lava flows: Drones are supposed to save the dogs of La Palma