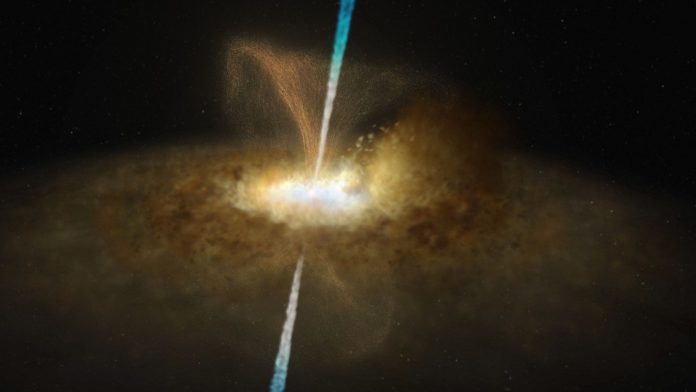 At the center of NGC 1068, 47 million light-years away, is a black hole several million times the mass of the Sun – but from Earth’s perspective, it’s hidden behind a dense ring of dust. This is evidenced by new observations made by the research team using the Very Large Telescope. The study thus confirms the current model for the central regions of galaxies such as NGC 1068, according to the scientists in the journal “Nature”.

According to current knowledge, almost every galaxy contains a black hole with a mass of one million or even a billion times the mass of the Sun. If matter from the outside falls into such a black hole, its temperature rises dramatically and emits intense radiation – the center of the galaxy lights up. Then astronomers talk about an active galactic nucleus. According to Violetta Gámez-Rosas of Leiden University in the Netherlands and colleagues, the shape of an active galactic core as seen from Earth “depends mainly on the orientation of the dust ring surrounding the black hole.” Rings, the bright core is fully visible. However, if the observer is at the level of the dust ring, the dust obscures the core.

For a long time, the galaxy NGC 1068 was considered the prototype of the second case, that is, as an active galaxy we look at the dust ring from Earth. But two years ago, observations made with the European Southern Observatory’s Very Large Telescope in Chile led to doubts about the base model: they showed a dust ring in the center of the galaxy, but it was much thinner than the model had predicted, and thus the active core shield was unrecognizable.

The inner region of the galaxy Messier 77

Research teams around the world have begun searching for explanations – including Gomez Rosa and her team. Using the four reflecting telescopes of the Very Large Telescope, they observed infrared radiation from the central region of the galaxy. Since the surrounding dust is also heated by radiation from the galaxy’s core and then also emits radiation, the researchers were able to discern the dust ring more closely with their measurements. From the intensity and wavelength of the measured radiation, they determined the spatial distribution and temperature of the dust – and created an accurate model of the dust ring.

Their analysis showed that the black hole is surrounded by a dense, cooler ring, as the model predicted, but observations two years ago showed only the inner part of the ring, which is much hotter. In addition, a comparison with observations made by another team that studied NGC 1068 using radio telescopes showed that the black hole is indeed hidden by this ring as seen from Earth.

The result is important not only for this galaxy but for the general understanding of active galactic nuclei. Gomez-Rosas asserts that “one result cannot answer all the questions we have”. “But we have taken a huge step forward in our understanding of how active galactic nuclei work.” This is also important for understanding the history of our galaxy, the Milky Way. “Because this also has a supermassive black hole in the center – which may also have been active in the past.”

The PS4 and PS5 versions are the same in quality